Matt Turner made two saves in a penalty shootout and Ricardo Pepi scored the decisive goal in the fifth round to give the MLS All-Stars a victory over the Liga MX All-Stars from Mexico on Wednesday in Los Angeles.

The match was tied 1-1 after 90 minute before going straight to the five-round penalty shootout, which MLS won 3-2.

Turner (New England Revolution) stopped attempts from Rogelio Funes Mori (Monterrey) in the second round and Salvador Reyes (Club America) in the fourth. Erik Lira (Pumas) missed the target in the third round.

Pepi, an 18-year-old for FC Dallas, had his shot hit underneath the crossbar and go across the line.

Jesus Murillo of Los Angeles FC scored in front of his home fans at Banc of California Stadium in the 53rd minute to counter the 20th-minute goal by Cruz Azul’s Jonathan Rodriguez that put Liga MX ahead.

The MLS All-Stars lost their previous three shootouts, to England’s Everton in 2009, to Spain’s Real Madrid in 2017 and to Italy’s Juventus in 2018. MLS hadn’t won an All-Star Game since beating England’s Tottenham Hotspur 2-1 in 2015.

Liga MX defender Jorge Sanchez (Club America) was the star of the first half. In the eighth minute, he made a side-volley clearance off the goal line of a shot by LAFC’s Diego Rossi.

Sanchez then hit the cross to Rodriguez for the first score.

Liga MX had a chance to extend the lead just before halftime, but Andre Blake (Philadelphia Union) charged out to steal the ball off the foot of Santiago Gimenez (Cruz Azul) on a breakaway. 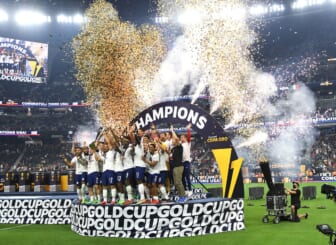 It was no surprise there was some intensity for the exhibition game with the storied rivalry between the countries, especially with the U.S. national team defeating the Mexicans in the finals of CONCACAF’s Nations League and Gold Cup this summer.

The national teams’ next matchup will be a World Cup qualifier on Nov. 12 in Cincinnati.

The match was halted briefly in the 11th minute because of a goalkeeper chant that uses a homophobic slur. Several matches involving Mexico in the Nations League and Gold Cup had similar stoppages.