Dustin Poirier stuns Conor McGregor in 2nd round at UFC 257 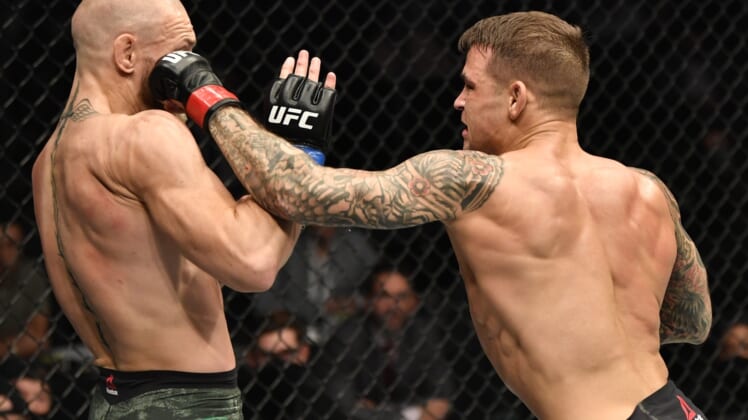 Conor McGregor is the biggest star in mixed martial arts. But he’s been busier being a star outside the cage than a fighter in it in recent years, and it caught up to him Saturday night at UFC 257.

Dustin Poirier (27-6), meanwhile, has been steadily picking off the best fighters in the lightweight division, and it paid off for the Lafayette, La., native with a fantastic finish of McGregor at the 2:32 mark of the second round in their bout in Etihad Arena in Abu Dhabi.

“The goal was to be technical and pick my shots and have a big finish,” Poirier said.

Dublin’s McGregor (22-5) got off to a flying start in the opening round, finding a home with his patented left hand, and also connecting on stiff right jabs. Poirier tried to wear him down in the clinch, only to be met with sharp shoulder shivers by McGregor.

But Poirier found his footing by the end of the round and ramped it up in the second.

Repeated kicks to McGregor’s lead leg slowed his attack, and the heavy-hitting Poirier turned up the heat, with a big left to the jaw, setting up the final flurry which deposited a glassy-eyed McGregor to the mat and ended the bout.

Poirier’s win was also retribution of sorts, as it avenged a loss in their first encounter at UFC 178 in 2014, a bout McGregor won in less than two minutes.

Poirier has now won two fights and is 7-1 in his past eight, with the only loss in that span to undefeated Khabib Nurmagomedov. McGregor has dropped two of three and has only won once since 2016.

In the evening’s co-feature bout, former Bellator lightweight champion Michael Chandler (22-5) made a sensational splash in his UFC debut. The San Diego resident swarmed New Zealand’s Dan Hooker (20-10), landing a right to the body, a huge left to the jaw which dropped him, and a flurry of ground strikes before the bout was waved off for a TKO at the 2:30 mark of the opening round.