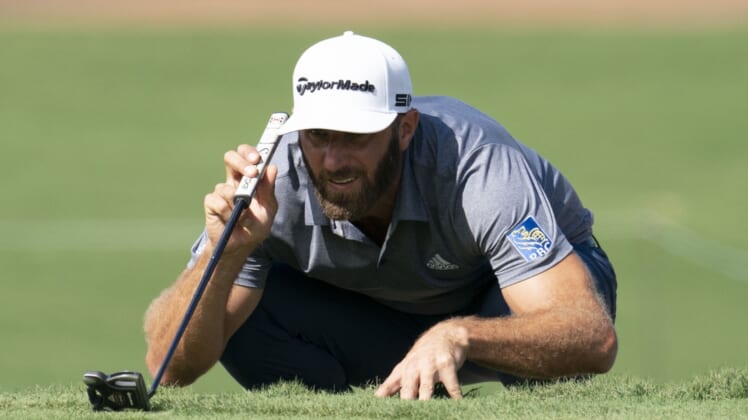 January 9, 2021; Maui, Hawaii, USA; Dustin Johnson lines up his putt on the third hole during the third round of the Sentry Tournament of Champions golf tournament at Kapalua Resort – The Plantation Course. Mandatory Credit: Kyle Terada-USA TODAY Sports

Dustin Johnson arrived in Los Angeles on Monday as the world’s No. 1-ranked golfer by a big margin.

That’s courtesy of a win in Saudi Arabia in his last start, his fifth victory in his past 13 events. That stretch includes claiming the FedEx Cup in September and his second major at the Masters in November.

That’s not to mention three runner-up finishes and a T3 during that span.

To put his current dominance into perspective, Johnson holds a 5.78-point lead over No. 5 Tyrrell Hatton in the official world golf rankings. That is the same margin between Hatton and No. 155 Daniel van Tonder.

“Obviously, the confidence is pretty high right now,” Johnson told reporters on Wednesday ahead of The Genesis Invitational. “I feel good about what I’m doing, I’ve got a lot of confidence in everything that I’m doing.”

Johnson’s worst finish since claiming the FedEx Cup was a T11 at the Sentry Tournament of Champions while coming off a two-month break following the Masters.

He’s the heavy pre-tournament favorite at every sportsbook this week. In 13 previous starts at Riviera Country Club, Johnson has a win in 2017 and four other top-10 finishes.

“There’s golf courses that I always look forward to going to and playing,” he said. “Especially here, it’s one of my favorite courses.”

Johnson, 36, is the +550 favorite by several oddsmakers, including DraftKings and FanDuel. No other golfer has better odds than second-ranked Jon Rahm at +1100.

The Genesis Invitational is one of three “elevated status” tournaments on the PGA Tour along with the Memorial and the Arnold Palmer Invitational. With it comes a $9.3 million purse and 550 FedEx Cup points to the winner.

The Genesis Invitational has tremendous field

As such, it attracts a marquee field that includes eight of the top 10 players this week.

And then there’s his Masters defense, which will begin 50 days from Wednesday.

Johnson said he will travel to Augusta National in a few weeks to play a couple of rounds, but really won’t plan for the Masters until the week of the tournament (April 8-11). While he’s playing well, Johnson said he’s continually working to improve every facet of his game.

“This game is never easy,” he said. “Every day something is different. “Obviously, I’m playing well, I’ve got a lot of confidence in everything that I’m doing.