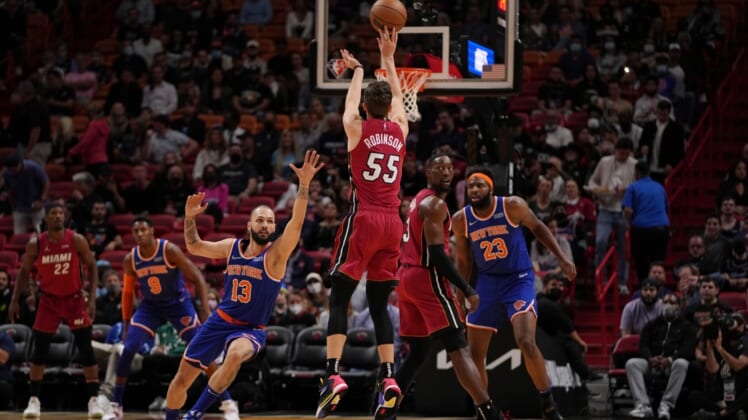 Duncan Robinson scored a game-high 25 points, leading the host Miami Heat to a 110-96 win over the New York Knicks on Wednesday night.

The Heat never trailed in this game, and they have beaten the Knicks 10 times in their past 12 meetings.

Miami’s Jimmy Butler added 22 points and Tyler Herro — who had missed the past three games due to COVID protocol — scored 21. P.J. Tucker had one of his best games of the season with 20 points.

Miami was without starting point guard Kyle Lowry, who missed his fifth straight game due to personal reasons.

New York, which has lost five of its past six games — including two in a row — was led by Obi Toppin, who had 18 points off the bench. RJ Barrett added 17 points.

Knicks power forward Julius Randle, the NBA’s reigning Comeback Player of the Year, was held to 11 points and six rebounds. He turned the ball over four times and was on the bench for much of the second half, playing 27 total minutes.

The Heat have the best home record in the Eastern Conference at 17-5. Miami is 20-9 against the East, and the Heat are 10-0 when getting at least two days of rest.

Early on, Tucker was sensational, scoring 10 points on 4-for-4 shooting, including 2-for-2 on three-pointers. Miami used Tucker’s brilliance to roll to a 30-16 first-quarter lead.

In the second quarter, Herro emulated Tucker. Herro had 12 points on 4-for-4 shooting, including 2-for-2 on three-pointers as Miami took a 59-46 lead into halftime.

Miami stretched its lead to 92-67 after three quarters.

New York went on a 19-4 run in the fourth quarter, but it wasn’t enough.

For the game, Miami shot 50 percent and held New York to 42.2 percent.