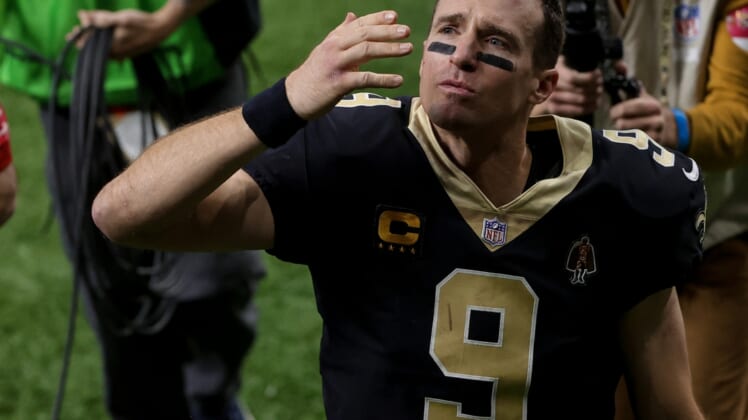 Jan 17, 2021; New Orleans, Louisiana, USA; New Orleans Saints quarterback Drew Brees (9) blows a kiss to his family as he walks to the tunnel following a 30-20 loss against the Tampa Bay Buccaneers in a NFC Divisional Round playoff game at the Mercedes-Benz Superdome. Mandatory Credit: Derick E. Hingle-USA TODAY Sports

Drew Brees, who is expected to retire in the coming months, might have handed the New Orleans Saints a parting gift Friday.

The 42-year-old quarterback agreed to restructure his contract, lowering his 2021 base salary to $1,075,000, the veterans’ minimum, multiple media outlets reported. He had been due to make $25 million, with the Saints getting socked with a $36 million salary-cap hit on his deal for the year.

The revised pact would save the Saints $24 million against the cap this year if they release Brees after June 1. That money could help a franchise that already was well over the salary-cap limit. New Orleans would face an additional $11.5 million in cap charges for Brees in 2022 based on the new deal.

Brees is the NFL’s career leader in completions (7,142) and passing yards (80,358). His 571 touchdown passes rank second behind the 581 of Tampa Bay Buccaneers quarterback Tom Brady, and his career average of 280 passing yards per game ranks second behind the 307.7 average of Kansas City Chiefs QB Patrick Mahomes. Brady and Mahomes will square off in the Super Bowl on Sunday.

Brees has played the past 15 years with the Saints after starting his career by playing five seasons for the then-San Diego Chargers. He has a career 172-114 regular-season record as a starter and a 9-9 record in the postseason, having led New Orleans to its lone Super Bowl championship following the 2009 season.

Saints coach Sean Payton said earlier this week that he expects to learn Brees’ decision on his future soon. He added that the club hopes to bring back Jameis Winston, who along with Taysom Hill served as Brees’ backups in 2020.