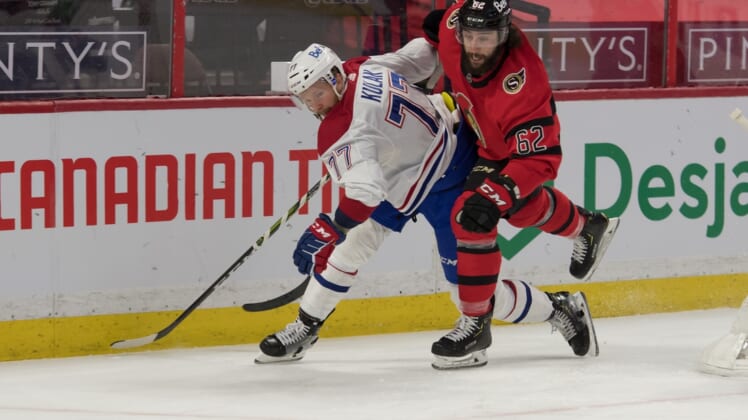 The line of Phillip Danault, Brendan Gallagher, and Tomas Tatar combined for six points as the visiting Montreal Canadiens collected a 4-1 victory over the Ottawa Senators on Thursday.

Danault and Gallagher each had a goal and an assist for the Habs, while Tatar had two assists. Jake Evans also had two assists, as the second-year forward recorded his first multi-point game in the NHL.

The Canadiens have won three straight games and are 4-0-2 over their last six games. The last two victories came after a nine-day hiatus due to COVID-19 protocols, as the Habs returned from their unexpected break with 120 minutes of dominant hockey, including Tuesday’s 4-0 shutout of the Edmonton Oilers.

Connor Brown spoiled Allen’s shutout bid at 18:13 of the third period for Ottawa’s only goal. Brown’s goal came on the power play, snapping an 0-for-15 power-play drought for the Senators that stretched through almost six full games.

The Senators suffered the first regulation loss of their seven-game homestand after posting a 3-0-3 record in the first six contests.

Danault’s third goal of the season opened the scoring for Montreal midway through the first period. After collecting only 11 points over his first 28 games, Danault has eight points (two goals, six assists) over his last five games.

This revival has coincided with Danault being reunited on a line with Gallagher and Tatar. The trio has combined for 22 points (nine goals, 13 assists) over the Canadiens’ last five games.

Just 48 seconds into the second period, Evans’ pass found a wide-open Byron in front of the Senators’ net for Montreal’s league-leading eighth short-handed goal of the season.

Ottawa forward Colin White left the game late in the second period due to an upper-body injury.

The Canadiens improved to 3-1-2 in six games against the Senators this season. The two clubs play again on Saturday in Montreal.