As the National Football League and Cleveland Browns quarterback Deshaun Watson argue in front of former federal Judge Sue Robinson about the sexual misconduct allegations made against him, the NFL might already be bracing for a shorter suspension than it wants.

The NFL concluded its investigation into more than two dozen accusations of sexual misconduct and assault against Watson over the past two years. Under the new NFL collective bargaining agreement, commissioner Roger Goodell no longer has unilateral authority to impose suspensions on players who are accused of violating the personal conduct policy.

As a result, the NFL is presenting its case to Robinson with its findings from the investigation. After negotiations with the NFLPA, representing Watson failed, following the league’s insistence on a year-long suspension at minimum.

While the league is still pushing Robinson as the independent arbitrator to recommend a year-long suspension, with Watson’s defense arguing for no discipline, it seems the NFL might already be preparing for a much shorter ban.

According to Rob Maadi of the Associated Press, the NFL is more likely to abide by Robinson’s judgment if she rules that a 6-8 game suspension is warranted based on her findings.

When multiple teams were competing with the Browns to acquire Watson, the expectation was he would only be sidelined for a maximum of eight games. However, that changed when more accusers came forward.

While that might still be the preferred outcome for officials within the league, it now seems increasingly unlikely to happen.

Why NFL might accept a reduced Deshaun Watson suspension

The new CBA is playing a massive role in the process. Players insisted on changes to the league’s disciplinary process, wanting to remove Goodell’s authority to impose suspensions without a system of checks and balances. 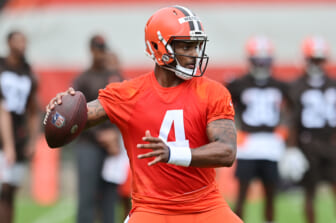 Under the new policy, the NFL and NFL Players Association appoint an independent arbitrator to review the evidence submitted by both sides. Following that review, Robinson makes a ruling on whether or not the player should be suspended and for how long.

Only after that ruling is made can there be an appeal. If either the NFL or NFLPA asks for the ruling to be reviewed, then Goodell steps in as the appeals judge and makes a decision. This will be the first time under the new CBA that both sides have gone through this process.

According to Maaddi, that is playing a direct role in the league potentially accepting a ruling for a 6-8 game ban. It would all be to avoid an appeals process that the source said would be “a terrible situation for everyone involved.”

If Watson only receives a six-game suspension and the NFL appeals, with Goodell imposing a year-long ban, things could get ugly. For a league that hates legal battles and the threat of its owners coming under scrutiny, that would become the logical next step for Watson’s side. Just as they’ve argued in front of Robinson, the precedent of the NFL not holding owners to the same standard would be used as a defense.

However, there is likely one additional factor in the back of the NFL’s mind. After suspending Atlanta Falcons wide receiver Calvin Ridley one year for placing parlay bets on games while he was sidelined, there is a damaging implication that could be sent with a reduced suspension for Watson.

If Ridley serves a year-long bet for betting on games – amid the NFL’s partnerships with sportsbooks – and Watson only receives suspension not even half as long after facing two dozen credible accusations of sexual misconduct, it could leave an even bigger stain on the NFL’s reputation than how it handled Ray Rice years ago.