Deshaun Watson’s sexual assault accusers slam the Cleveland Browns in an upcoming Real Sports with Bryant Gumbel interview for giving the quarterback a massive guaranteed contract after acquiring him via trade in March.

Part of the reason the team was able to land the highly coveted QB a couple of months ago was due to their willingness to give the 26-year-old the type of contract that was once unheard of in the NFL. Upon completing a trade for Watson, his representatives and the Browns came to terms on a new five-year contract extension that would guarantee him $230 million over the life of the deal.

Huge amounts of money being given out in contracts is not unheard of in the league, however, they are never guaranteed to the level Watson received. The decision by the Cleveland Browns even earned some blowback from other organizations in the league. As they recognized how it would affect future negotiations with their top stars.

Beyond the ramifications the Deshaun Watson contract has had in the league, it has also had negative reverberations among the 22 women that have accused the QB of sexual assault in recent years. Not only was the former Houston Texans star guaranteed a massive sum of money few others have ever gotten, but it came while in the midst of a major scandal that is still months away from a resolution.

On Tuesday, HBO released more footage from the interview several of the women, and their lawyer Tony Buzbee had with Soledad O’Brien for the network’s long-running sports series. Ashley Solis, one of the first women to come forward with allegations against Watson felt his new deal was like a big “screw you” to her and the 21 other accusers.

“It’s just like a big screw you,” Solis said. “That’s what it feels like. That we don’t care. He can run and throw, and that’s what we care about.”

Fellow accuser Kyla Hayes called the $230 million deal “sick.” “It was sick to me . . . I felt like he’s being rewarded for bad behavior,” Hayes said.

The women’s attorney piled on to the deal by explaining his belief that the contract shows the Browns and the NFL really don’t care about the sexual assault claims made by his clients. “I don’t think the team cares about what Deshaun Watson may have done in a massage session. And based on my personal experience with the NFL, I don’t think they care either,” Buzbee said.

The exclusive interview on Real Sports with Bryant Gumbel debuts tonight at 10 PM EST on HBO. 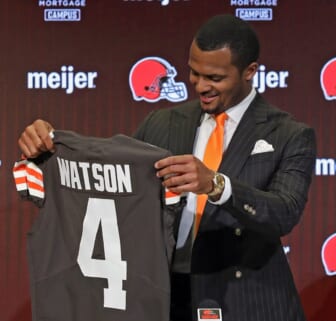