Darius Garland: ‘Cleveland Cavaliers can make it to the Eastern Conference Finals’ next year 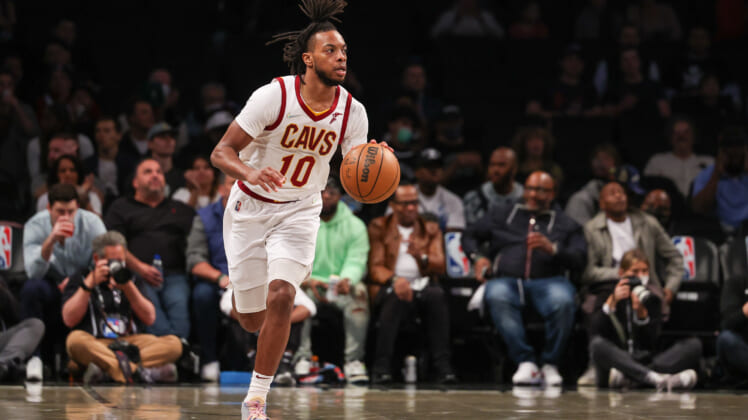 The Cleveland Cavaliers burst onto the scene during the 2021-22 season, doubling their win total from the year before. First-time All-Star Darius Garland’s growth was a major reason why.

Garland finished third in most-improved player voting after averaging 21.7 PPG and 8.6 APG with the Cavs in his third season as a pro. But as with any team hoping to contend, it’s not just Garland who helped make the Cavaliers a threat in the Eastern Conference.

Evan Mobley made the All-Rookie first-team after being the third pick in the 2021 NBA Draft and Jarrett Allen also became a first-time All-Star, giving the Cavs a big three that’s only set to improve over the next few seasons.

But if you ask Garland, it won’t take several years for that growth to take place. Despite missing the playoffs last season, Garland boldly suggests they’re ready to compete right away.

Darius Garland believes his Cavaliers can be among the best

If we’re piecing together way-too-early predictions of the strongest teams in the Eastern Conference, there are a few organizations that immediately come to mind, but the Cleveland Cavaliers aren’t necessarily one of them.

One has to think of the Milwaukee Bucks as strong contenders for long as Giannis Antetokounmpo is around. The Miami Heat don’t appear to be on the brink of falling off with Jimmy Butler and Bam Adebayo as their top two.

Of course the defending ECF champs, the Boston Celtics still have their core together and have since added Malcolm Brogdon to bring in another scoring threat. How the Philadelphia 76ers respond with a full year of Joel Embiid paired with James Harden could offer different results in the 2022-23 season as well.

Not to be forgotten, the Brooklyn Nets still haven’t broken up the Kevin Durant-Kyrie Irving-Ben Simmons trio, and that’s an All-NBA group. Oh, and the Atlanta Hawks added two-way stud Dejounte Murray to their playoff roster, which has already been to the Eastern Conference Finals as well.

So, are the Cavaliers most equipped to compete for a top seed in the East? Well, there’s no reason to rule them out, they certainly have the potential, but how quickly it comes together could be another story. Are they really ready to go from being the eighth-best team in the East to becoming a top-two squad, all by growing from within?

Garland has the right mindset. It’s great to hear that level of confidence out of a young player, but it’s certainly a bold claim. As mentioned, the Cavs have a bright future, but I’m personally skeptical of whether their core has enough to catapult them to the very top of the league. At least not right away.

We still don’t know the future of Collin Sexton, who remains a restricted free agent. He appears likely to return, but are Garland and Mobley good enough to lead the charge all the way to the ECF? They may need to add another piece to get the job done.

But, to be fair, we haven’t seen them at their full potential after Sexton made it through just 11 games a season ago. Maybe this team really can take an even bigger than expected leap this offseason.