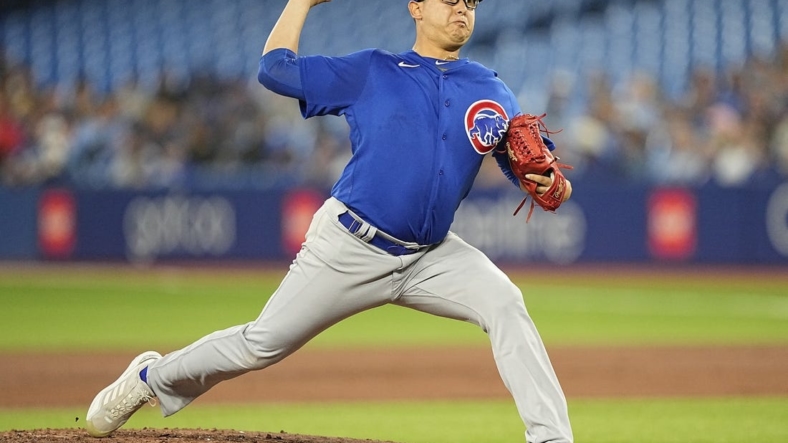 Danny Jansen, who hit a three-run homer in the seventh inning, added an RBI single in the bottom of the 11th as the Toronto Blue Jays defeated the visiting Chicago Cubs 5-4 on Monday.

Cubs right-hander Javier Assad, making his second major league start, allowed no runs, four hits and two walks in five innings. He struck out one while maintaining his 0.00 ERA through nine career innings.

Chicago’s Alfonso Rivas led off the third with a single, took third on Nick Madrigal’s one-out single and scored on Willson Contreras’s fielder’s-choice grounder to shortstop.

Seiya Suzuki led off the Cubs’ fourth with a single and took third on a single by Franmil Reyes. Nico Hoerner followed with an RBI single to right.

Madrigal hit a one-out single in the fifth and moved to third on Contreras’s ground-rule double. Ian Happ struck out swinging and was thrown out at first when the ball was not caught. Madrigal was out on the return throw home.

Reyes was walked with one out in the sixth and moved to third on Rafael Ortega’s two-out single. Tim Mayza replaced Berrios and allowed a two-run double to center field by pinch hitter P.J. Higgins.

Erich Uelman, who pitched a perfect bottom of the sixth, allowed a leadoff walk to Chapman in the seventh, then a single to Raimel Tapia and Jansen’s 11th home run of the season.

Before the game, the Cubs placed right-hander Adrian Sampson and left-hander Justin Steele on the restricted list. They did not meet Canada’s COVID-19 vaccine requirements. Left-hander Brendon Little was added as a substitute.

Toronto claimed outfielder Bradley Zimmer off waivers from the Philadelphia Phillies on Monday.