While Washington Commanders owner Daniel Snyder didn’t appear before the House Committee on Oversight and Reform, it didn’t stop him from facing tremendous criticism from committee members and the NFL.

The committee launched an investigation into allegations of the Commanders’ toxic culture for years under Snyder’s regime as owner. It also came in response to the NFL’s investigation into one of its most prominent owners, resulting in a historic $10 million fine but never releasing the findings.

When the committee opened its inquiry into Snyder in October 2021, members brought in former Commanders’ employees to testify regarding their experiences inside the organization. Many came forward, including a former team executive providing documentation alleging financial misconduct by the franchise.

In addition, Snyder faced direct allegations of sexual harassment from a former staffer. He was also accused of sexual assault in 2009. While Snyder denies the allegations, he didn’t make himself available for testimony to the committee.

Following Roger Goodell’s testimony to the committee on Wednesday, House Oversight Committee Chairwoman Carolyn Maloney announced she is issuing a subpoena for Daniel Snyder to testify next week.

It is a significant development, especially during a day that has provided new allegations against Snyder with the franchise owner facing direct criticism from the NFL and a former player.

Among the revelations to come out of the House Committee on Oversight and Reform hearing on Wednesday, Maloney accused Snyder of blocking information from being provided during the investigation.

In a 28-page report released in advance of the hearing the House Oversight Committee detailed its initial findings. After months of conducting interviews and reviewing documents made available, many committee members believe Snyder played a key role in the toxic workplace environment.

Snyder isn’t the only one accused of withholding critical information. The report also details how much the NFL wouldn’t provide to the committee. According to the report, Snyder cited privacy as the reason for the NFL to seal the records.

In addition to the House committee’s preliminary findings that Snyder fostered a toxic workplace environment and withheld information, he is also accused of conducting a “shadow investigation” into those who came forward against him.

According to the report, Snyder hired side investigators with the intent of discovering information to discredit or harm reporters, accusers and anyone who intended to come forward against him. They also attempted to deflect the blame onto former team president Bruce Allen.

Snyder denied these allegations, with his representation providing a statement suggesting the committee conducted a “politically-charged show trial” and was never focused on obtaining “the truth.” He also stood by obligations overseas as the reasoning for not testifying this week.

The accusations of Snyder allowing for the Commanders’ toxic workplace to exist for many years fall in line with the previous report. It’s also part of the reason why Maloney believes Snyder has refused to testify on the matter.

Before Goodell testified virtually, his opening statement was provided. In that release, he specifically addressed the workplace environment that existed in Washington.

“It is clear to me that the workplace in Washington was unprofessional and unacceptable in numerous respects: bullying, widespread disrespect toward colleagues, use of demeaning language, public embarrassment, and harassment. Moreover, for a prolonged period of time the Commanders had a woefully deficient HR function, particularly with respect to reporting practices and recordkeeping.”

Despite finding ample evidence of issues within the organization, the Commanders only received a relatively minor punishment. Snyder couldn’t be involved in day-to-day operations and received the $10 million fine. However, he is in full control of the club now and is one of the wealthiest owners in professional sports.

As more information about the Commanders’ issues come to light and new accusations come forward, at least one of their former players is happy. Su’a Cravens, who played in Washington from 2016-’17, made his feelings towards Snyder clear.

“I can’t wait until this poor excuse for a human being is forced to sell his team! He’s ruined so many careers and made life difficult for so many that did no wrong. Karma really comes full circle. The funds of the wicked will be transferred to the righteous!” 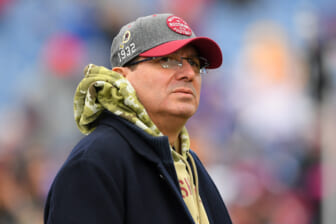 Despite all of this, it remains highly unlikely that the NFL will force Snyder to sell the team. Instead, internal discipline handed down behind the scenes is expected and he no longer holds credibility with his peers.