Dallas Cowboys cornerback Trevon Diggs had an amazing second season in 2021. It was one of the best the league has seen from the position in 15 years, and the 23-year-old is actually aiming to top it and maybe make some history in 2022.

After being drafted 51st overall in the 2020 NFL draft, Diggs had a very solid showing in his rookie season. He started in 11 of 12 games, pulled in three interceptions, and wracked up 58 tackles in a strong NFL debut. However, in 2021 he took his game to an elite level.

Related: Dallas Cowboys training camp 2022: Everything you need to know

Last season, Diggs started in all but one game, recorded 52 tackles, and added an unbelievable 11 interceptions — tied for the fourth highest all-time — for a Cowboys team that one the NFC East. His performance earned his first Pro Bowl and All-Pro honors. It was one of the greatest seasons from a defensive back in Cowboys history. And that is saying something for a franchise that legendary cornerback Deion Sanders played many seasons for.

For most players, trying to repeat such a season is difficult enough. However, Diggs actually hopes to surpass his interception numbers from last season. “[I want to] be higher than last year,” Diggs told USA Today on Thursday. “Beat my 11 and just keep going and improving.” 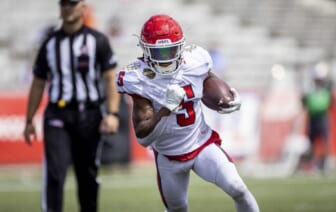 Those are some lofty goals since only 13 players have had more than 11 interceptions during the NFL’s over 100 years of existence. And double-digit INTs hadn’t been achieved in 15 years until Diggs. Not even the aforementioned “Neon Deion” ever got to 10. The Hall-of-Famer’s best number was seven during his fifth and final year with the Atlanta Falcons.

But in Diggs’ mind, more than 11 is possible since he believes he should have snagged 14 INTs last season.

Fourteen interceptions are the current NFL single-season record. It is a number the legendary Dick Lane was able to achieve in 1952. Diggs is unlikely to get 14 interceptions, and there is a good chance he won’t even get 11 for a second straight season. However, even if he could pull in 10, that would still make league history.