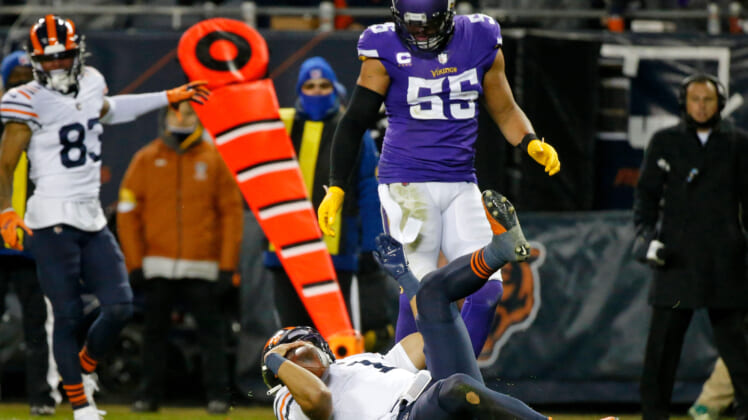 We’ve reached the slow part of the NFL offseason after the draft before training camps open up later this summer. Yet there are still several notable veteran free agents who remain unsigned. Four-time Pro Bowl linebacker Anthony Barr is one of those well-known players still looking to find a new team for the 2022 season.

After eight seasons playing for Mike Zimmer and the Minnesota Vikings, with the team firing the head coach and replacing Barr with Za’Darius Smith, that potential connection has likely disappeared.

Anthony Barr’s interest has been cold, but Cowboys could offer lifeline

While Barr became a free agent at the same time as everyone else once his contract expired, there has been very little to suggest teams are extremely interested in the inconsistent linebacker with durability questions.

Though one team could be emerging from the pack, with interest in offering Barr a contract.

According to Clarence Hill Jr., the Cowboys have considered signing the 30-year-old linebacker for a role in their defense, if the two parties can come to an agreement on his value.

If Barr is signed by the Cowboys, he’d likely take over for Jabril Cox in the starting lineup, forming a trio of Micah Parsons, Leighton Vander Esch and Barr.

Barr, who’s missed a total of 20 games over the past two seasons has displayed an ability to play at an elite level in the past, but keeping him on the field has been more difficult as of late.

On the bright side, Barr made it through 11 games a season ago and had a solid all-around performance as the versatile defender that he is.

Teams have been intrigued with Barr in the past. His 6-foot-5 frame is massive for an off-ball linebacker, he can do a bit of rushing the passer, his speed allows him to cover backs and tight ends, and his above-average football IQ leads to turnovers and other big players.

It’s a wonder he remains available this late in the process. Teams likely have their medical concerns, or maybe Barr’s contract demands were a bit out there early on (pure speculation), but as training camps near, expect him to land a starting role somewhere in the NFL.