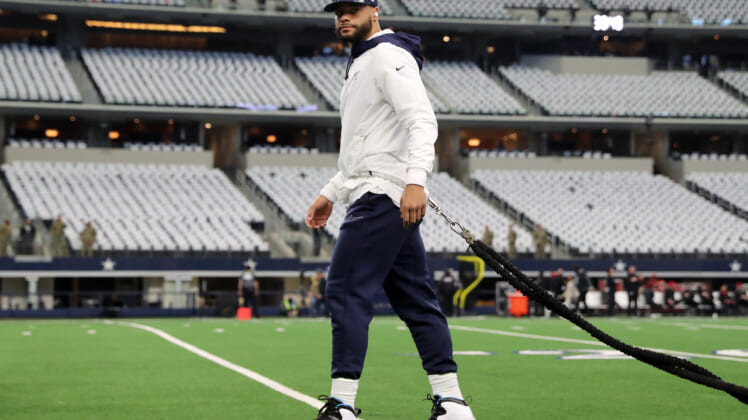 Dallas Cowboys quarterback Dak Prescott is the latest sports figure to speak out on the tragic events in Texas earlier this week.

An 18-year-old gunman entered Robb Elementary School in Uvalde, Texas, killing at least 19 students and two educators in yet another example of gun violence targeting children in this country.

Like so many others in responding to the senseless death of these young children, Prescott spoke from the heart. He also looked in the mirror and focused on his micro situation within the broader spectrum of our society. His words were eye-opening and depressing.

These words are about as chilling as it gets. A young man thinking twice about bringing children into the world due to the fact that he’s afraid to send them to school. An American-centric problem hitting home for many.

Dak Prescott has dealt with tragedy, speaks with a heavy heart

Back in April of 2020, Prescott lost his brother to suicide. Jace Prescott, a former offensive lineman at Northwestern State in Louisiana, died on April 24 of that year due to a gunshot wound. After his death, Dallas’ star quarterback spoke about the tragedy.

“I mean, obviously tears and tears and tears,” Dak Prescott said, via CBS Sports. “I mean, I sat there and tried to gather what had happened, and wanted to ask why for so many reasons. It was like this sense of all these emotions coming off of my back.”

Dak Prescott himself was the Cowboys’ representative for the 2021-22 NFL Walter Payton Man of the Year award. He continues to do so much good within the communities he’s been involved in.

That includes the Fath Fight Finish Foundation, which helps empower individuals, families and communities to fight through adversity.

Per the foundation’s mission statement:

“The foundation focuses on three main initiatives: cancer research, mental health & suicide prevention, and bridging the gap between law enforcement and the communities they serve. Faith Fight Finish was established as a tribute to Dak’s Mom, Peggy, who lost her battle with colon cancer in 2013; and its work honors Dak’s brother, Jace, who was lost to suicide in 2020.”

As a community leader in the state of Texas, Prescott’s words mean something. Like the rest of us, he’s struggling to grasp how something like this can continue to happen in this country. Undoubtedly, he’ll also work hard to be part of the solution.