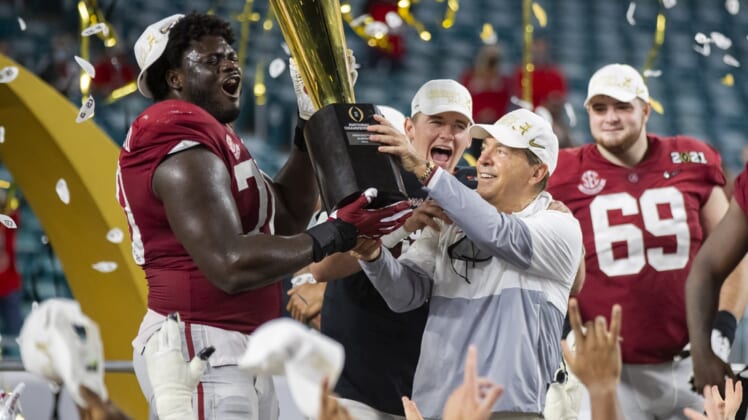 College football is keeping its options open for future expansion, according to a report Friday from the College Football Playoff management committee.

The committee was presented with options ranging from six to 16 teams in the new system.

“Since January 2019, when the presidents charged us with taking a careful look at all aspects of CFP, including the format, this group has diligently evaluated options for the future,” said Bill Hancock, Executive Director of the CFP. “Its efforts were delayed as a result of the pandemic, but it met again this week in Dallas, and we look forward to hearing more when its work is complete.

“I want to remind everyone that whatever recommendations the management committee may make, all decisions about our future format — whether to remain at four teams or change to a different format — will be made by the 11 presidents and chancellors who manage the CFP.”

Despite the recent proposals, Hancock said the CFP committee remains content with the current format for the time being.

“We are entering the eighth year of our 12-year agreement for the College Football Playoff and the management committee is extremely satisfied with the popularity and success of the CFP. It is wise and good management to review where we stand as we discuss what the future might — ‘might,’ for emphasis — look like.”

The CFP has a group comprised of four members — Big 12 commissioner Bob Bowlsby, Mountain West commissioner Craig Thompson, SEC commissioner Greg Sankey and Notre Dame’s athletic director Jack Swarbrick — who are expected to report on potential future changes at a meeting which could take place as soon as this summer.

Multiple conferences have pushed for expansion, including the Pacific-12 Conference, which has been left out of the playoff in five of the seven playoff seasons.

The American Athletic Conference, led by commissioner Mike Aresco, is perhaps the most adamant about future expansion.

“I think it has to happen because there’s just too much dissatisfaction with the current system,” Aresco said. “Ultimately, I think there will be support for it because not only would the (Group of 5) obviously want it, but clearly there are (Power 5) guys being left out who would like a shot.”

The goal for the 2021 season, however, is to simply return to normalcy. Hancock expects closer to normal crowds, along with bands, cheerleaders and mascots returning to action following a COVID-19-filled 2020 year.

Those decisions will be made officially in the fall by the CFP and host city officials.