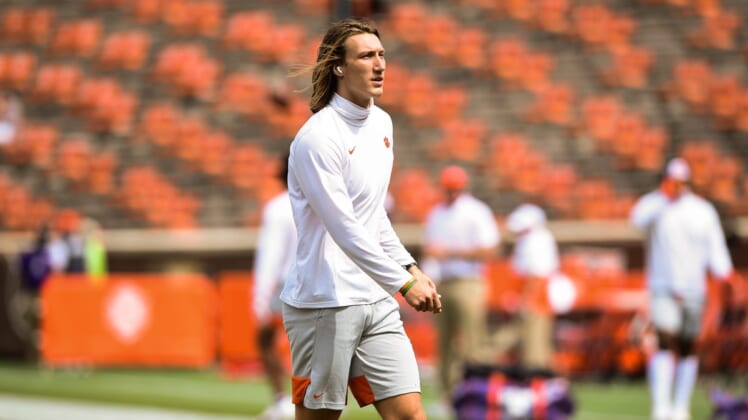 Clemson quarterback Trevor Lawrence(16) during warmups before their game against The Citadel Saturday, Sept. 19, 2020. Kr Warmups 091720 008

The No. 1-ranked Clemson Tigers are slated to take on Boston College on Saturday as the college football season hits full gear. Unfortunately for Clemson, it looks like it will not have Trevor Lawrence on the field. According to multiple media reports, Lawrence has tested positive for COVID-19.

Update: Trevor Lawrence’s positive COVID-19 result came on Wednesday. This means he is eligible to play against Notre Dame

In reality, there’s now an open question whether Clemson will even take on Boston College at Memorial Stadium this coming Saturday. Lawrence himself now has to self isolate for at least 10 days.

The team will have to go through several COVID-19 protocols. That includes widespread testing before the game can even be played.

Given Lawrence’s status as perhaps the best player in the nation, this adds another wrinkle to the truncated season.

Without Lawrence in the mix against Boston College, former five-star recruit DJ Uiagalelei will likely get the call. That won’t impact a heavily-favored Clemson team.

However, Trevor Lawrence’s status for next week’s game against the fourth-ranked Notre Dame Fighting Irish is now in question.

Thus far this season, the junior has completed 70.7% of his passes for 1,833 yards with 17 touchdowns and two interceptions in six games. Lawrence has added four rushing touchdowns to the mix.

The clear cut No. 1 overall prospect in the 2021 NFL Draft, Lawrence is seen as a generational talent. He’s tallied a whopping 97 total touchdowns compared to 14 interceptions in 36 career games.

This news adds another layer to what has been a questionable situation around the college football world surrounding COVID-19. We’ve already seen major outbreaks throughout the country. Games have been canceled. Star players continue to opt out.

With the virus growing in the United States right now, the hope is that somehow the amateur gridiron world will be able to avoid it. If not the idea of the entire season being completed is not great.