With just a week left in NFL preseason, it looks like Cincinnati Bengals star Jessie Bates III has decided that his holdout has gone on long enough as he has reportedly finally arrived at training camp today.

Beyond the Bengals beginning their build towards getting back to the Super Bowl, and franchise quarterback Joe Burrow missing the preseason after suffering a ruptured appendix, the biggest story in Cincinnati this summer has been the holdout of four-year veteran Jessie Bates III.

In March, the organization slapped the franchise tag on the talented 25-year-old to avoid him hitting the free agent market this offseason. However, as is often the case with players hoping to land their first big long-term contract, Bates III was not happy with receiving the tag and did not sign the tender. Months have passed and there seemed to be no progress in a new long-term deal, and the safety has stayed away from the team in a show of dissatisfaction with his current predicament.

Well, it seems as if that stalemate might have finally come to an end with the regular season set to commence in a couple of weeks. On Tuesday morning, the Enquirer’s Bengals beat reporter Kelsey Conway revealed some big news when it comes to the situation between Bates III and the organization.

With there being no reports of the Bengals being willing to give Bates III a long-term deal just yet, and no movement on a possible trade, the idea of missing out on $12.9 million this fall and winter must have finally sunk as too high as cost for the 2018 second-round draft pick. 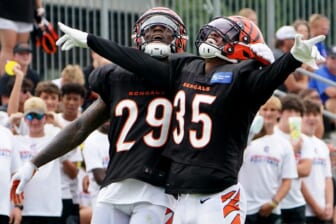 Following the report, ESPN was able to confirm that the defensive back is expected to sign his franchise tender. Bates III will become one of the best available defensive backs on the free agent market in 2023.