The Cincinnati Bearcats have the football world talking about College Football Playoff expansion after nearly beating Georgia in the 2021 Peach Bowl. 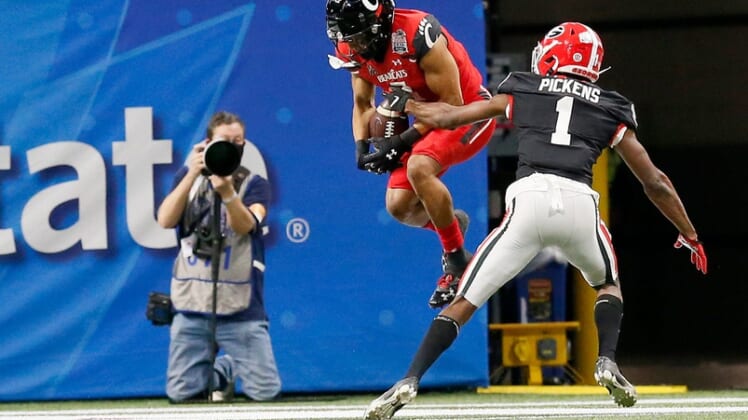 The Cincinnati Bearcats nearly capped off a perfect season against the Georgia Bulldogs in the 2021 Peach Bowl, but ultimately fell short by a score of 24-21. Nevertheless, the fact that Cincinnati put up such a fight sparked debate on social media about how lowly rated the College Football Playoff committee had the American Athletic Conference champions.

It had to be heartbreaking for the Bearcats and their fans to blow a 21-10 lead entering the fourth quarter, yet they proved their program belongs with the Power 5 conferences and wasn’t deserving of being ranked No. 8 in the country by the CFP committee.

It certainly helps that Bearcats coach Luke Fickell has strong ties to the state of Ohio, having played at Ohio State and served on the Buckeyes’ coaching staffs led by Jim Tressel and Urban Meyer. Fickell even coached the Bucks on an interim basis in 2011.

With a strong in-state recruiting network to build off of, Fickell has brought enough talent to Cincinnati both from Ohio and otherwise, and coached exceptionally well to get the Bearcats through their first nine games of 2020 undefeated. His expertise is on the defensive side of the ball, and Cincinnati proved itself to be just as good as Georgia’s elite unit on Friday. The two really are close in the raw data from Pro Football Focus:

In any event, this was a pretty wild game in which Cincinnati had to overcome 11 penalties for 80 yards and a furious Bulldogs rally before emerging victorious. All the more impressive to battle through self-inflicted adversity in addition to a determined opponent coming back from a late double-digit deficit.

Additionally, the Bearcats showed they were more than just a strong defense. Their offensive playmakers showed out in very critical situations to keep this game close.

Running the ball was tough all afternoon, yet Jerome Ford broke through for a 79-yard touchdown in the third quarter. Cincinnati quarterback Desmond Ridder also orchestrated a touchdown drive with just six seconds left on the clock in the first half, capped by an 11-yard scoring pass to Josh Whyle, giving the Bearcats a 14-10 advantage at the break.

Unfortunately those clutch plays weren’t quite enough for Cincy in the end, as Georgia got the ball back with a little too much time remaining for its last possession. Bulldogs kicker Jack Podlesny blasted a 53-yard field goal through the uprights to secure his team the victory with three seconds left. An inconsequential safety as time expired thereafter stretched the margin to three points.

Despite falling short, Fickell has proven more than capable of standing on his own as a head coach, following up back-to-back 11-win campaigns with a strong 2020 effort. Not only does the Bearcats program have a bright future under his leadership provided he stays in place, but the College Football Playoff could well become more inclusive based on this single outcome.