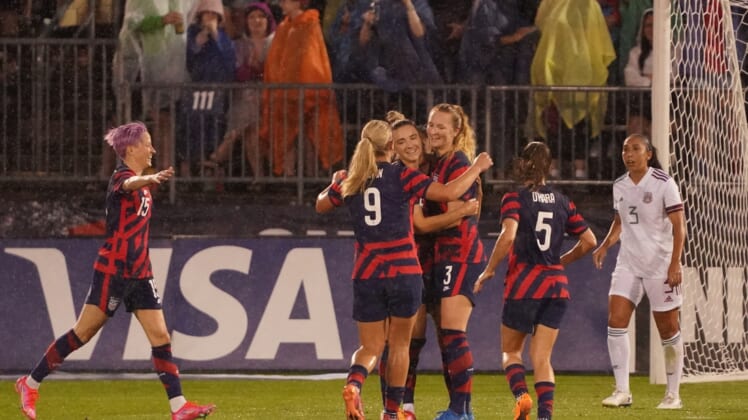 Christen Press scored twice as the U.S. women’s national team ran its unbeaten streak to 43 games with a 4-0 win against Mexico in East Hartford, Conn., on Thursday.

After Samantha Mewis made it 1-0 in the 21st minute, Press (39th) and Tobin Heath (74th) added goals before Press redirected a cross by Tierna Davidson in the 85th.

Press has 63 career international goals, including 15 goals along with 18 assists in her past 36 games.

The match and the one coming Sunday at the same site vs. Mexico complete the schedule before the U.S. opens the Tokyo Olympics tournament July 21 vs. Sweden.

The victory Thursday was the United States’ 19th in a row. Also, the U.S. has 52 wins and five ties in the past 57 home games.

It was Mewis to Mewis for the first goal as sisters Kristie and Samantha started together for the WNT for the third time. Megan Rapinoe forced a turnover deep in the final third and fed a pass to Kristie Mewis. She found her younger sister at the top of the box, and Samantha did the rest of the work.

She took two dribbles to her right for an opening, and her shot deflected off a Mexican player on the way to the lower right corner for her 23rd U.S. goal.

On the second goal, Samantha Mewis provided some help. She slipped a pass to Rapinoe on the left side of the penalty area. Press made a run down the middle and had an unmarked tap-in on the ball by Rapinoe.

Heath made it 3-0 less than a minute after entering the match, connecting on a 36-yard strike.