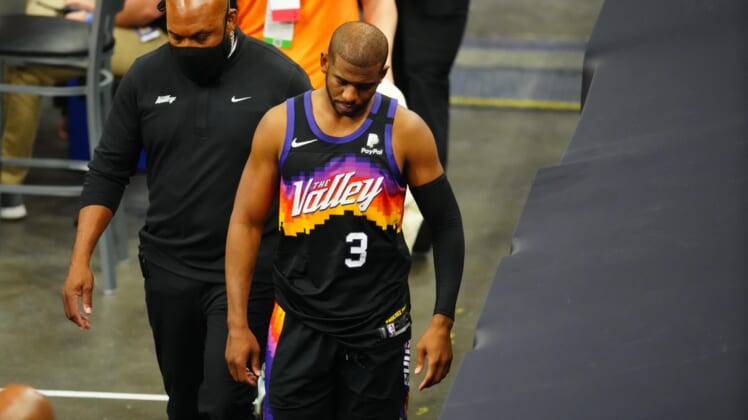 Jun 1, 2021; Phoenix, Arizona, USA; Phoenix Suns guard Chris Paul (3) leaves the game after suffering an injury against the Los Angeles Lakers in the second half during game five in the first round of the 2021 NBA Playoffs at Phoenix Suns Arena. Mandatory Credit: Mark J. Rebilas-USA TODAY Sports

He was officially ruled out early in the fourth quarter due to a contusion.

Paul was trying to gain rebounding position against Wesley Matthews of the Lakers when contact from Matthews sent Paul reaching for the shoulder, which he initially injured in Game 1 on May 23. Paul fell to the ground with 6:47 left in the quarter and he got back up and signaled to the training staff that the shoulder was hurting again.

After a Phoenix timeout, Paul remained in the game to make two free throws. The Lakers inbounded the ball, and the Suns fouled on purpose to stop the clock and allow Cameron Payne to replace Paul, who headed to the locker room for examination. 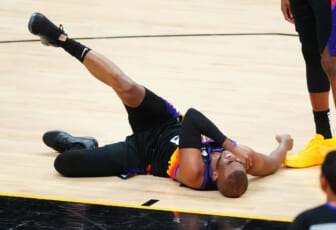 Paul returned to the bench area at the start of the fourth quarter. Paul and Matthews had a conversation that concluded with a handshake between the two.