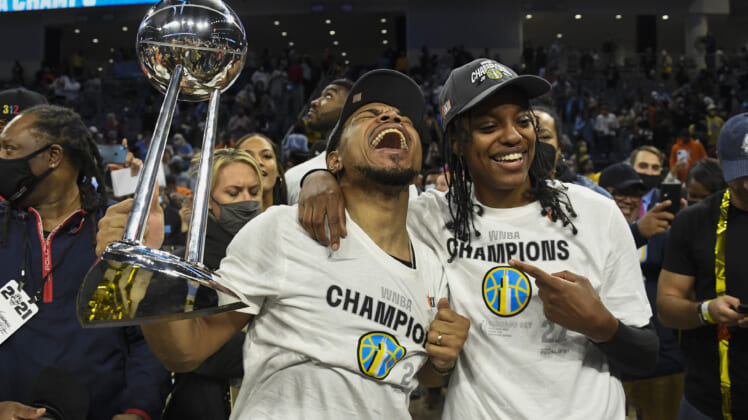 For the first time in franchise history, the Chicago Sky are WNBA champion following an 80-74 win over the Phoenix Mercury to close out the series in four games.

Sky forward Kahleah Copper was named MVP of the series putting 17.0 points, 5.5 rebounds and 1.2 steals including scoring 10 points in the series deciding Game 4.

The Chicago Sky were led by Allie Quigley who scored 26 points in the series closeout connecting on a series-high five three-pointers. Candace Parker filled the stat sheet for the Sky, recording 16 points, 13 rebounds, five assists and four steals.

Courtney Vandersloot came one assist short of the first triple-double in WNBA Finals history by finishing the game with 10 points, 15 assists, and nine rebounds.

The Phoenix Mercury were led by Brittney Griner finishing with 28 points on 63% shooting and seven rebounds. Griner led the series in, scoring averaging 23.3 points adding 6.0 rebounds.

Skylar Diggins-Smith and Diana Taurasi each chipped in 16 points in the Mercury closeout loss with the former adding eight assists.

Prior to this season, the Chicago Sky had only been in the WNBA Finals once in 2014 where they were swept ironically by the Phoenix Mercury. In an effort to secure their first championship, the Sky signed veteran forward and Illinois raised Candace Parker.

Parker joined the Sky following 13 seasons with the Los Angeles Sparks where she won two WNBA MVPs, a Defensive Player of the Year award, was named to six All-Star Games, and led the team to a WNBA title in 2016 while being named Finals MVP.

Chicago got off to a rough start falling to 2-7 through their first nine games primarily due to Parker suffering a foot injury that forced her to miss eight games after leading the team to victory in their season opener.

Upon returning to the lineup, the Sky put together a seven-game win streak their longest in a single season in franchise history. Coming off the Olympic break, however, they were only able to split their remaining 12 games to finish the season 16-16 giving them the sixth seed in the playoffs.

They began their playoff journey defeating the Dallas Wings 81-64 in the first round then beat the Minnesota Lynx 89-76, a team led by Defensive Player of the Year Sylvia Fowles, in the second round advancing to a best-of-five semifinal round series against the top-seeded Connecticut.

The Connecticut Sun were coming off their best season in their team’s history posting a 26-6 record featuring league MVP Jonquel Jones, Most Improved Player Brionna Jones and headed by Coach of the Year Curt Miller.

The Chicago Sky went on to dispatch the Sun in the semifinals closing out the series in four games to advance to the WNBA Finals against the fifth seeded Phoenix Mercury who defeated the second seeded Las Vegas Aces in the semifinals in five games.

The Mercury came into this series having won three WNBA titles in four appearances only losing in their first Finals in 1998 against the Houston Comets. Phoenix Mercury had never lost a WNBA Finals format since it was changed to a best-of-five in 2005.

The series opened with the Chicago Sky snatching home court defeating the Mercury 91-77 followed by Phoenix evening the series with a 91-86. Chicago avenged their game two loss dismantling Phoenix 86-50 in their home Finals opener setting up their victory in game four.