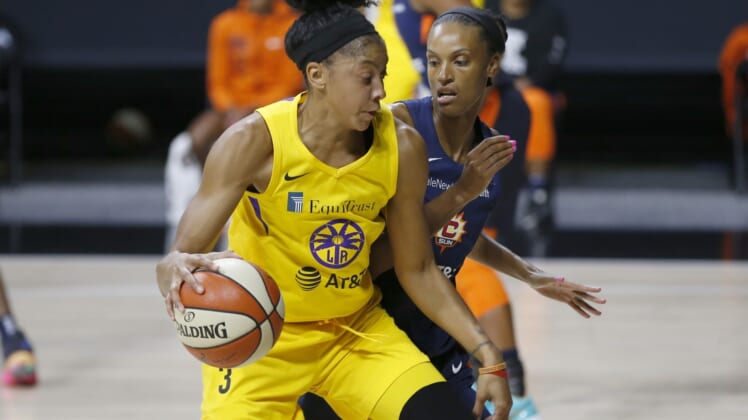 The Chicago Sky confirmed Monday that they signed the two-time WNBA MVP as a free agent. Terms of the deal weren’t announced, but Her Hoop Stats reported that Parker will make $190,000 this year and $195,000 next year, fully guaranteed.

Parker, 34, had spent her first 13 WNBA seasons with the Los Angeles Sparks.

Sky general manager and head coach James Wade said in a statement, “It’s indescribable to put into words what this moment means to our organization and to the city of Chicago. It’s an incredible story of a homecoming between a team striving to become a championship organization and one of the best players in basketball

“Candace is someone who has meant so much to the game — and not just in L.A. or Chicago — her stature is truly unmatched. It says a lot about the strides we’ve made in the right direction and we believe Candace is the one who is going to take us to that next level.”

Parker, a five-time WNBA All-Star, is the league’s reigning defensive player of the year, and she came in third in the MVP voting last year. She averaged 14.7 points and 9.7 rebounds per game as the league played all of last season in Bradenton, Fla.

The Sparks finished 15-7 in 2020, placing third in the regular season before losing 73-59 to the Connecticut Sun in the second round of the playoffs, a one-game round. Parker produced a game-high 22 points, a game-high 14 rebounds and five assists in that contest.

Parker, a 6-foot-4 center, was part of consecutive NCAA championship teams while playing for the University of Tennessee.

A native of Naperville, Ill., Parker was a two-time Gatorade Player of the Year at Naperville Central High School in the Chicago suburbs. The Sparks selected her with the No. 1 overall pick in the 2008 WNBA draft.