Chicago Bulls All-Star Zach LaVine has reportedly been playing through a serious knee injury that will require offseason surgery.

LaVine was an extremely important part of the Bulls’ 46-36 bounce-back season in 2021-2022. The eight-year veteran averaged 24. 4 points, 4.6 rebounds, and 4.5 assists over 34.7 minutes in the 67 games he started this season. And it seems he was putting up those strong numbers in the back half of the season with a knee that was at 50% strength “on a good day.”

In a Wednesday editorial, Joe Crowley of the Chicago Sun-Times reported what sources told him about the difficulties LaVine has had in battling through the injury since hurting his knee in a game in January.

“According to a source close to the situation, however, LaVine’s knee was “more like 50% and that’s on a good day,” Crowley wrote. “The source also said the maintenance of the knee the past few months was an all-day ordeal, and that there would have been a good number of All-Star-type players that would have shut it down for the season with all LaVine had to deal with.”

LaVine, who is an unrestricted free agent this summer, is guaranteed to have surgery on the joint immediately after the season the source claims. Luckily for the 27-year-old, his issues don’t seem to be degenerative after he also had surgery on that same knee in 2017.

“And while LaVine wouldn’t come out and say for sure he was headed for off-season surgery — likely a scope — the source said he will in fact have surgery almost immediately this offseason,” wrote Crowley. “One scenario that had been ruled out, according to the source, was that the knee was degenerative and LaVine would be dealing with this long-term.”

LaVine will miss the Chicago Bulls’ Game 5 matchup tonight against the Milwaukee Bucks after entering the NBA health and safety protocols on Tuesday. The Bulls are down 3-1 in their first-round best-of-seven series. 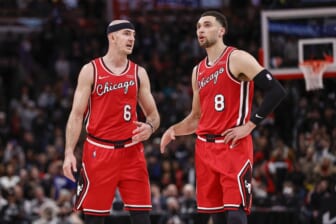