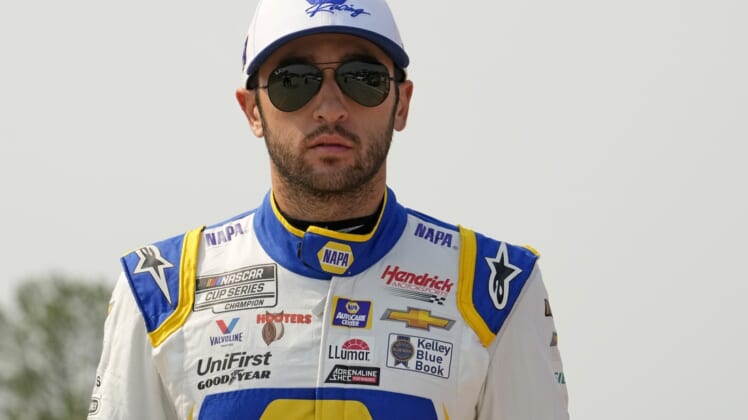 A lousy starting position proved to be no problem for Chase Elliott as the road-racing ace deftly worked his way up through the field, took the lead for the first time on Lap 38 and drove to victory in Sunday’s Jockey Made in America 250 at Road America in Elkhart Lake, Wis.

Oh yeah, the victory at the Road America road circuit — which hosted its first Cup event since 1956 — was the Hendrick Motorsports star’s seventh in a Cup car and his sixth in his last eight starts.

Elliott led a race-best 24 laps. His margin of victory was 5.7 seconds.

The victory was his second of the season — his other coming at Circuit of the Americas, which, like Road America, is a natural-terrain road course.

Kyle Busch, who started from the rear of the field because he was forced into his backup for the start, finished third in his Joe Gibbs Toyota.

Elliott started 34th after he was unable to complete a lap as cautions came out during the two times he was attempting his full speed lap.

It may have cost Austin Cindric a chance at victory. Cindric, who drives full-time in the Xfinity Series and part-time in Cup for Team Penske, was leading late in the second stage when his Ford Mustang broke a drive-train component and that ended his day.

“I only had one-wheel drive and when you only have two other ones spinning with 750 horsepower it is a bit challenging,” Cindric said. “It was quite dramatic taking the lead and then immediately losing everything. Not a weekend I am necessarily happy about.”

The Series heads next to the 1.5-mile Atlanta Motor Speedway oval.