The Charlotte Hornets appeared to make out extremely well during the 2021 NBA Draft. After James Bouknight fell to them at 11th overall, they traded a future first-rounder to the New York Knicks in exchange for the No. 19 selection and the rights to Texas big man Kai Jones.

ESPN’s Adrian Wojnarowski broke the news of the trade and who Charlotte intended to target with the pick:

Jones is a wiry 6-foot-11 forward who adds some much-needed size, versatility and dynamic athleticism to the Hornets’ frontcourt.

Gone appear to be the days of counting on the likes of Bismack Biyombo and Cody Zeller to pull significant weight. Both are free agents, which leaves a clear opening for Jones to contribute right away alongside newly acquired veteran center Mason Plumlee.

Although his production in college won’t jump out of the box score, Jones showed marked improvement as a sophomore with the Longhorns. He’s a smooth athlete with great leaping ability, a fine 3-point shot (38.2% on 34 attempts last season) and can really run the floor.

Hornets young star LaMelo Ball was the NBA Rookie of the Year this past season. He loves to get out in transition and create easy baskets for teammates. Jones is precisely the type of dynamic athlete who can translate defense to offense in a hurry on the fast break. 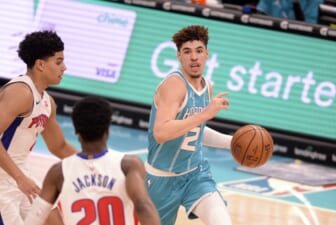 With players like Ball, Terry Rozier and Gordon Hayward flanking him, Jones’ immediate role will be that of an energy guy to crash the boards, let his high motor run hot and flat-out wreak havoc on the opposition.

The selections of Bouknight and Jones are in a similar vein. It’s clear the Hornets wanted to get more explosive and find players with the ability to plug into the rotation right away. These weren’t developmental prospects, even though Jones in particular still has a much higher ceiling to explore.

Look out for the Hornets in the coming years. There will be plenty of buzz coming out of Charlotte after an active, seemingly successful draft night.

As for the Knicks’ side of this trade, they’re clearly building toward something big. With a culture change successfully pulled off under the watch of head coach Tom Thibodeau, New York should once again become an intriguing free-agent destination over the next few years.