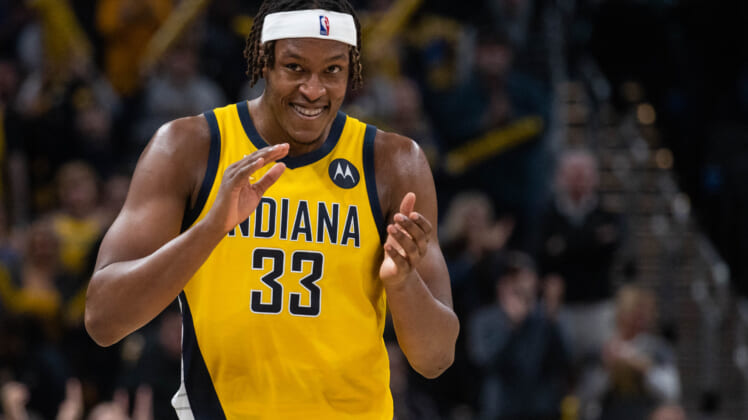 The Charlotte Hornets reportedly are a possible landing spot for Myles Turner if he and the Indiana Pacers can’t agree on a new long-term contract extension.

Turner’s future in Indiana is very much up in the air. The seven-year veteran is in the final year of his deal and is set to make $17.5 million in 2022-2023. While the Pacers may have to do the work of planning for life without the player they took with the eleventh pick in 2015, he is still a valuable trade chip now due to his talent and expiring contract.

On Tuesday, Bleacher Report NBA insider Jake Fischer reported how the Turner trade market has been reignited, and that the Charlotte Hornets — along with their desire to move the 15th pick in the 2022 NBA Draft — could be a possible trade partner in the near future.

Related: Sportsnaut NBA mock draft – Projections for every pick in Round 1 & 2

“Indiana widely explored the market for Myles Turner before the 26-year-old’s season ended because of a stress reaction in his left foot,” Fischer wrote. “The Pacers have since resumed trade conversations about Turner ahead of the draft, sources told B/R. As Marc Stein noted Monday, Turner’s impending free agency in 2023 seems to be clear grounds for the Pacers to re-engage his trade market this offseason … The Charlotte Hornets have long been considered a potential landing spot for Turner, and the Hornets have communicated around the league a willingness to move the No. 15 pick, sources said.”

Assuming the Hornets are the landing spot for Myler Turner, and their pick in the first round is included, here are two possible frameworks to make a deal happen.

With the Turner making close to $18 million next season, the Hornets don’t have many players they’d be willing to trade, or that the Pacers want in return that has similar salaries. That is why Charlotte may need to use their first-round pick as a sweetener for the Pacers to take on contracts that stretch beyond this upcoming season.

With that in mind, a deal that would be plausible would see the Hornets send Gordon Hayward and his $30 million or more annually over the next two seasons, and pick 16, to Indiana for Turner and guard TJ McConnell. Hayward playing for the Pacers would certainly appeal to the fan base since he was a former Indiana high school basketball star. And if he can stay healthy — big if — he is a notable offensive addition to the roster. 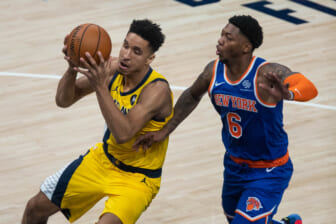 A second scenario would see the Hornets send over guard Terry Rozier and the 15th pick for Turner. Charlotte would have a glut of guards with Rozier, Brogdon, McConnell, and Tyrese Haliburton. However, if they were to move Brogdon, which they are rumored to be trying to do, then a swap for Rozier gets them a solid addition and a second pick in the top-20 this month’s annual event.