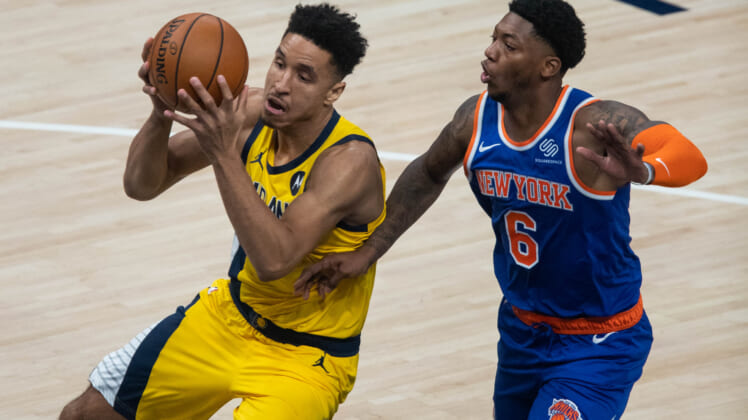 The New York Knicks were in talks with the Indiana Pacers about a potential Malcolm Brogdon trade ahead of the February 10 NBA trade deadline.

While nothing came to fruition on that end, the Knicks are likely going to kick the tires on the possibility again this summer.

“(Tyrese) Haliburton’s addition has made the Pacers evaluate the future of their incumbent point guard, Malcom Brogdon, whom the Knicks have some interest in as he’s a better defender and with more size than free agent Jalen Brunson. Brogdon is 6-foot-5 but comes with a heavy contract.”

It’s led to widespread speculation that a move for veteran point guard could be in the cards. In addition to Brogdon, the Knicks have been linked to the likes of Jalen Brunson and Tyus Jones in free agency.

Below, we look at two ways a Malcolm Brogdon trade to the New York Knicks could look.

Fresh off a 57-loss season, the Indiana Pacers are clearly in full-scale rebuild mode. Their decision to deal All-Star big man Domantas Sabonis to the Sacramento Kings for Tyrese Haliburton back in February 10 added another layer to this.

Indiana will likely want a young players and draft assets back in any potential Brogdon trade. It makes sense given how well the guard has performed since he was initially acquired from the Milwaukee Bucks back in the summer of 2019.

Sure there’s some injury concerns here (Brogdon has missed 62 games over the past two seasons). But he’s been an All-Star caliber point guard when he’s on the court. That type of player rarely becomes available.

A dud in his first season with the New York Knicks after signing a huge contract last summer, Fournier would have to be included for financial reasons. Indiana would also demand a high-value draft pick simply for taking on the remainder of his four-year, $73 million contract.

Boasting the sixth pick in the 2022 NBA Draft, Indiana adds another lottery selection for its troubles. It also brings in a potential third guard in Quickley behind the likes of the aforementioned Haliburton and Chris Duarte. Perhaps, head coach Rick Carlisle opts to go with a three-guard lineup in this scenario. 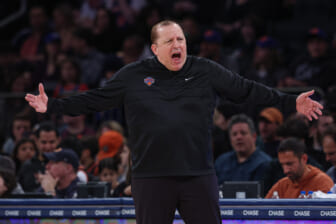 Stud young wing R.J. Barrett seems to be off the table in trade talks this summer. The NBA Comeback Player of the Year during the 2020-21 season, the same thing can’t be said for forward Julius Randle. In fact, there’s talk that he will be dealt during the offseason.

If that’s the case, New York could look to expand a Brogdon trade to a third team while also bringing in center Myles Turner. Much like Brogdon, the Knicks were in discussions with the Pacers for Turner ahead of the NBA trade deadline.

With Mitchell Robinson set to hit restricted free agency, the Knicks could opt to go with an upgrade in Turner. He’s an elite defender and has expanded his offensive game to the perimeter in recent seasons.

Unfortunately, this is unlikely to be a two-team swap with the Pacers having no interest in Randle. With that said, a contending team might actually look to pry the high-scoring forward from the Knicks.

Perhaps, the Memphis Grizzlies get involved. They could have interest in teaming Randle up with big man Jaren Jackson Jr. They also have three expiring contracts to offer up from a financial perspective.

Now, that would be an absolute blockbuster. It also makes sense for all three teams. Memphis adds three expiring contracts to the mix and could easily flip Brooks for a first-round pick.

As for the Grizzlies, they get a legit All-Star presence to team up with Ja Morant and Jaren Jackson Jr. With 2021 first-round pick Ziaire Williams set to take over for Brooks, moving the veteran forward this summer seems to be a possibility.

Meanwhile, New York builds a new core three in Turner, Brogdon and R.J. Barrett. That trio has playoff contenion written all over it.