LaMelo Ball made NBA history on Saturday, becoming the youngest player ever to notch a triple-double in the Charlotte Hornets' win over Atlanta. 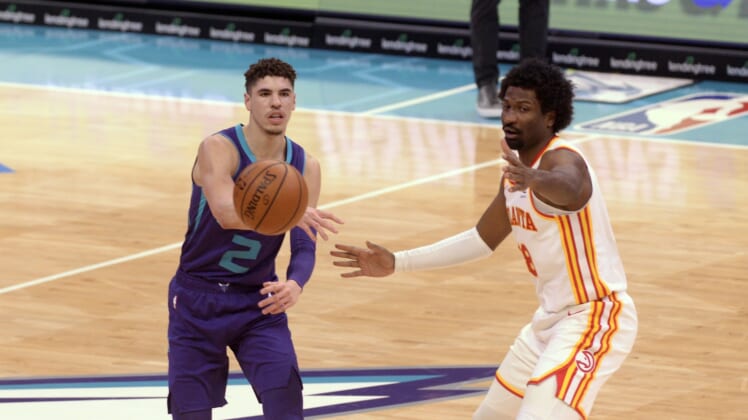 Charlotte Hornets rookie LaMelo Ball put up 22 points, 12 rebounds and 11 assists in the team’s 113-105 victory over the Atlanta Hawks on Saturday, becoming the youngest in NBA history to post a triple-double.

Ball was the No. 3 overall pick in the most recent NBA Draft, and is already living up to the hype despite not yet carving out a starting role.

Shams Charania of The Athletic made note of Ball’s epic achievement, and added some pretty fascinating context to the situation:

Ball triggered plenty of reaction from around the NBA world, some of which is featured below:

Despite entering Saturday night shooting just 40% from the field and averaging 11.8 points, Ball was showing flashes of brilliance. He impacts the game in other ways other than as a scorer, evident in his prior averages of 5.7 rebounds and 5.3 assists per contest. It was only a matter of time before the 19-year-old phenom’s talent shined through.

But this wasn’t merely a display of talent. It may prove to have been a full-blown coming-out party, as Ball sank his first seven shots from the field and barely wavered from there.

Well, it’s hard to ignore how strong Ball has looked only 10 games into his career. Few people probably expected Charlotte to be in playoff contention considering how improved the Eastern Conference is in recent years.

Due to the shortened, 72-game schedule and quick turnaround from last season, though, there are several squads who had low expectations yet are better rested than the elite teams who played in the Orlando bubble and are taking advantage of the unique circumstances. The Hornets are one of those teams.

Adding Gordon Hayward was a scrutinized offseason move. What’s funny is, Hayward is balling out thus far in Charlotte, with shooting splits close to the rarefied air of 50/40/90 on the young season, although it’s early.

Ball’s rapid ascent is likely to accelerate whatever plans the Hornets had for a long-term rebuild in 2020-21. What should’ve probably been another lost year and hopefully wishing for some lottery luck has transformed into surprising optimism amid a respectable 5-5 start.

Given the incredible struggles Devonte’ Graham has had as one of Charlotte’s starting lead guards, look for Ball to supplant him in the starting five in short order. From there, who knows how far the first-year wunderkind can lift the Hornets alongside Hayward.

Make no mistake about it, though: Ball has earned his spot as a starter already. It’s time for Charlotte head coach James Borrego to make the move to at least keep the team within shouting distance in the East playoff picture.