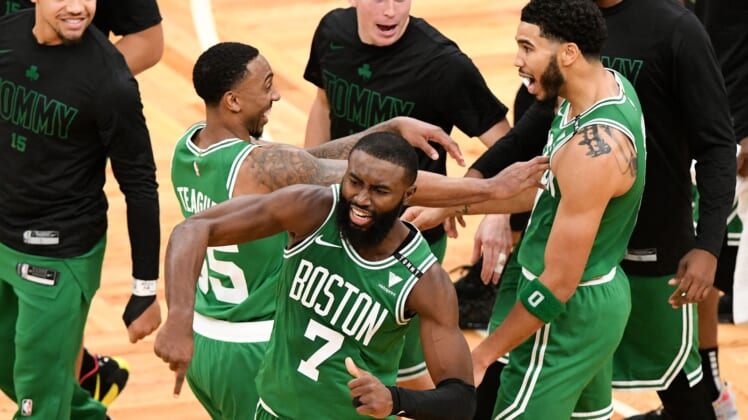 The Boston Celtics and Miami Heat are two of the most-recent NBA teams impacted by the ongoing COVID-19 pandemic and its spread around the league. Just hours before their game was set to tip off in Boston on Sunday, the game has been postponed due to COVID-19 issues.

According to Shams Charania of The Athletic, a Heat player returned an inconclusive test and would not have been able to suit up for the game. That would have left Miami with less than the required eight players to take to the court.

“The Boston Celtics-Miami Heat game tonight has been postponed,” Charania reported. “A Heat player has returned an inconclusive test, and team does not have required eight players to proceed with game tonight due to contact tracing.”

The Celtics were already set to have multiple starters out for this game due to the league’s virus-related protocols. Jayson Tatum tested positive for the virus twice this weekend, sending him to quarantine for at least 10 days. Contact tracing led to seven other players being quarantined within the Celtics’ roster.

This all comes after Kevin Durant missed a week of action due to NBA COVID protocols. It also comes with outbreaks happening with the Philadelphia 76ers’ organization. Interestingly enough, each team to face outbreaks recently have one common denominator.

These latest issues with the Heat and Celtics lend more credence to the idea that the NBA season should never have started outside of the bubble-like atmosphere that we saw at Walt Disney World in Orlando during the restart last season.

There were absolutely no issues in Orlando. All the while, the NFL and MLB dealt with major problems attempting to play outside of a bubble during this pandemic.

It also comes at a time that the COVID-19 pandemic is spreading across the United States unchecked. At the time of this article, north of 550,000 cases had been confirmed in the country over the past 48 hours.

Despite the Heat and Celtics game being postponed on Sunday, the NBA is not planning on putting a halt to the season. Given what we’re seeing right now and with multiple teams being forced to play without a ton of players, this seems to make no sense.

There were always going to be issues flying across the country during a pandemic. Teams playing in their home venues and being exposed to the virus in their home markets added to this.

For now, the NBA is remaining steadfast in its attempt to continue the season. Whether that continues should a team like, say the defending champion Lakers, see an outbreak, remains to be seen.

Vikings Territory - Don’t Fool Yourselves, Vikings Fans Have Much to Be Thankful For