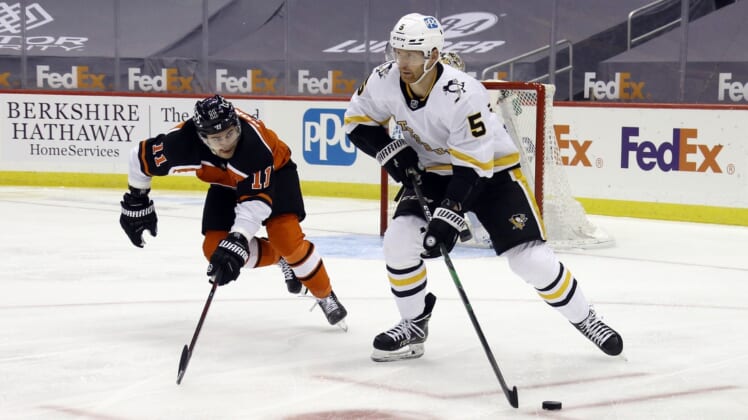 Claude Giroux and Sean Couturier scored in a shootout Thursday to give the visiting Philadelphia Flyers a 2-1 win over the Pittsburgh Penguins.

Giroux made a strong deke around goaltender Tristan Jarry, and Couturier roofed a backhand shot.

Jakub Voracek scored in regulation for Philadelphia, which had lost two straight and four of five. Goaltender Carter Hart, 0-5-2 in previous seven starts, made 31 saves in regulation and overtime, and stopped two of three Penguins in the shootout.

Sidney Crosby scored in regulation for Pittsburgh, which had won three in a row, and Jarry made 26 saves.

Flyers center Nolan Patrick left early in the third after he got hit in the right ear area by teammate Philippe Myers’ shot.

The teams played a tight style in the scoreless first, with the Flyers outshooting the Penguins 5-3.

One of the best chances in the first came from an unlikely source. Pittsburgh defenseman Brian Dumoulin, the more defensive-minded half of the team’s top pairing, got a breakaway with about 5 1/2 minutes left, but Hart snapped his pads together for the save.

Crosby got the only goal of the second, on a play that had a lot of elements and involved Dumoulin.

With the puck in the Penguins’ defensive end, Dumoulin’s stick broke. Crosby handed Dumoulin his stick, and Dumoulin used it to send the puck to defense partner Kris Letang, who took off up the ice.

Crosby raced to the Penguins bench, where assistant head equipment manager Jon Taglianetti picked out one of Crosby’s backup sticks and extended it over the ice for a handoff.

Crosby, left unguarded, grabbed the new stick on the fly and immediately swooped toward the net as Letang drew Hart to his right to make a save. Crosby, in stride, pounced on the rebound and shot it between Hart’s pads for a 1-0 lead at 5:04.

Voracek tied it at 1:24 of the third on much more conventional play. From the slot, he threaded the puck past Jarry’s stick and between his pads.