Canelo announced on social media that the fight will take place on November 6 in Las Vegas, Nevada.

Negotiations to make a bout between Canelo Alvarez and Plant for September 18 fell through when both fighters could not come to terms. Alvarez then entered negotiations to fight WBA light heavyweight champion Dmitry Bivol but then pulled out of that fight opting to return in November instead.

After successfully defending his championships against mandatory challenger Avni Yildrim, Alvarez then won the WBO super middleweight championship, defeating Billy Joe Saunders who retired on the stool at the conclusion of the eighth round due to a fractured orbital bone.

Caleb Plant won the IBF super middleweight title in January 2019 when he beat Jose Uzcategui. He has since successfully defended the belt three times with his most recent title defense coming against former champion Caleb Truax in January. 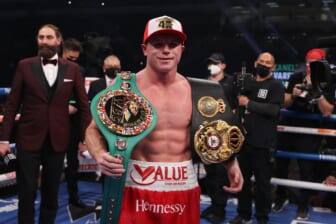