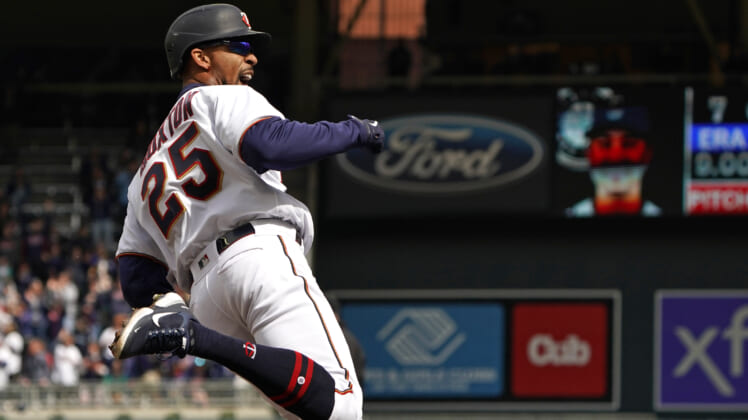 It didn’t take long for Minnesota Twins star centerfielder Byron Buxton to have to come out of the game. Buxton had to leave the field in the first inning, in just the seventh game of the Twins’ season. It began when by hitting a pop fly to shallow left field when neither Boston’s shortstop nor the left fielder could track the baseball.

This unexpected development caused Buxton to kick it up another gear, hoping to reach second base on the error. While Buxton did reach second, the way he slid into the base caused some trouble. Buxton apparently left the game with right knee soreness. The Platinum Glove winner got up right away and started walking toward the Twins dugout where he would leave the field of play, forcing himself out of the game.

Outfielder Nick Gordon promptly entered the game as a substitution and came around to score on a Luis Arraez single to give the Twins an early 1-0 lead over the Red Sox. While the early run support is nice for Joe Ryan on the mound, losing his star centerfielder who covers tons of ground in the outfield is not a good sign.

For Twins fans and baseball enthusiasts around the league, Buxton landing on the Injured List is nothing new. It’s really been the only knock on the blazing fast five-tool player thus far.

Buxton has never played a full season, with his career-high in games played being 140 back in 2017.

Hopefully, this latest injury doesn’t keep him down for too long. In order for the Twins to have a strong season, they need their star in center, and at the top of the batting lineup. Fresh off signing a seven-year, $100 million contract this offseason, obviously Buxton getting hurt in just his seventh game isn’t ideal.

Adding insult to injury, Buxton was off to a red-hot start this season, with three home runs hit in just 25 plate appearances. Now the Twins will have to make do without him once again. On the bright side, Buxton was able to jog off on his own, so maybe the right knee soreness isn’t a debilitating injury.

For now, the team hasn’t provided any official update. Buxton will undergo an MRI before any true determination can be made.