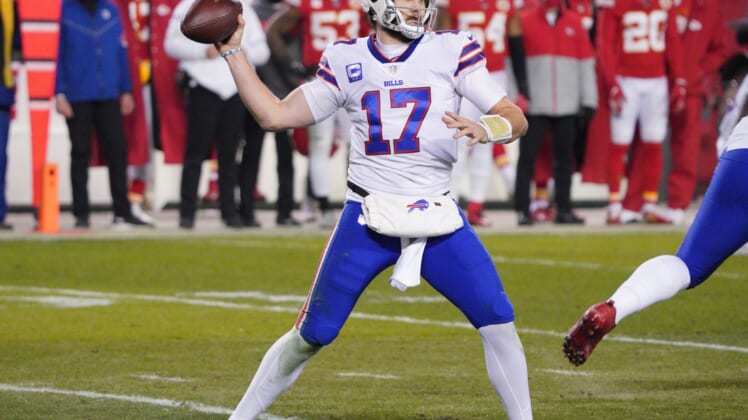 Josh Allen is one of the next young quarterbacks in line for a massive payday after leading the Buffalo Bills to the playoffs two straight seasons.

The seventh pick in the 2018 NFL Draft, Allen is guaranteed $3.36 million in base salary for 2021 — by comparison, Cowboys quarterback Dak Prescott’s new deal has an average annual salary of $40 million — and the Bills hold a fifth-year option for 2022.

Allen said he’s content to let his agent and Bills general manager Brandon Beane bang out the deal with the overall approach of “it happens when it happens.”

“I want to listen and be engaged in the contract talks,” Allen told NFL Network. “Ultimately that’s why you pay your agents, and that’s why you hire a guy like Brandon Beane and (assistant GM) Joe Schoen, and the front office guys and what they do. They’ll iron out the details, and if we can get to something soon, I’d obviously love to be locked down in Buffalo for a very long time. It’s a place that I call home. I love being there. I love the fan base. I love the city. It’s everything that I want, is there. If they called up and wanted to talk tomorrow, I’d be willing, but we’ll see. We’ll cross that bridge when we get there.”

Beane said last month he expects a deal to get done but wouldn’t be surprised if the contract comes next offseason. Allen credited Beane for being “great at his job.”

The recent trend of locking up quarterbacks at the end of their existing deals might be a pattern the Bills follow in light of contracts gone wrong with Carson Wentz (Eagles) and Jared Goff (Rams). The top two picks in the 2016 draft signed massive extensions only to be traded. Both count more than $20 million against their now-former teams’ salary caps for 2021.

Allen said he does hope to avoid one outcome — the franchise tag.

“I don’t think it’s great for the team, nor the player,” Allen said. “Again, I need to do more research on it, but if you look at the guys that’ve been tags in the past couple years, as far as the quarterback position goes, it was Dak, and Kirk Cousins. And at the end of the day, you could make the case that they should’ve just done the deal the year prior, or a couple years prior. So it is what it is. At the end of the day, whatever happens, happens. It’s not gonna deter me from trying to be the best quarterback for the Bills.”