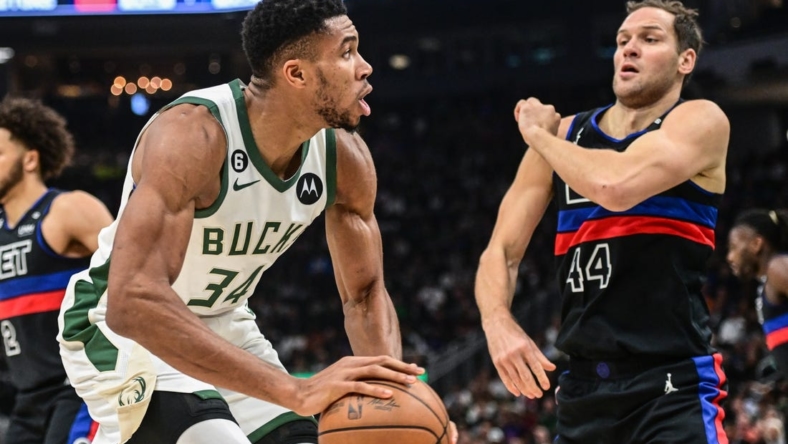 Giannis Antetokounmpo racked up 32 points, 12 rebounds and five steals and the host Milwaukee Bucks tied a franchise record for their best start by downing the Detroit Pistons for the second time in three nights, 116-91, on Wednesday.

They matched the 1971-72 and 2018-19 Bucks teams by beginning the season 7-0. The current group retained its status of being the league’s only undefeated team.

Milwaukee, which defeated the PIstons for the 15th time in the last 16 regular-season meetings, barely squeaked past its Central Division rival 110-108 on Monday. The rematch provided much less drama, as the Bucks led by double figures most of the second half.

Antetokounmpo scored 15 points in the opening quarter as Milwaukee took a 31-26 lead. The Bucks had 14 second-chance points during those 12 minutes.

Milwaukee led by as much as 13 in the second quarter before settling for a 56-47 halftime advantage. Antetokounmpo had 19 points and Holiday contributed 11, including a 3-pointer in the last second, during the half. Bogdanovic led the Pistons with 14 points.

A dunk by Antetokounmpo accounted for the first points of the second half.

The Bucks soon had a 9-0 spurt to make it 69-51. Antetokounmpo had a bucket during that stretch and Holiday capped it with a layup.

The Pistons crept within 10 points with less than two minutes left in the quarter. Antetokounmpo responded with a three-point play, a steal and two free throws in the last 33 seconds for an 85-68 lead.

Holiday drained a 3-pointer on the Bucks’ first fourth-quarter possession to extend the advantage to 20.