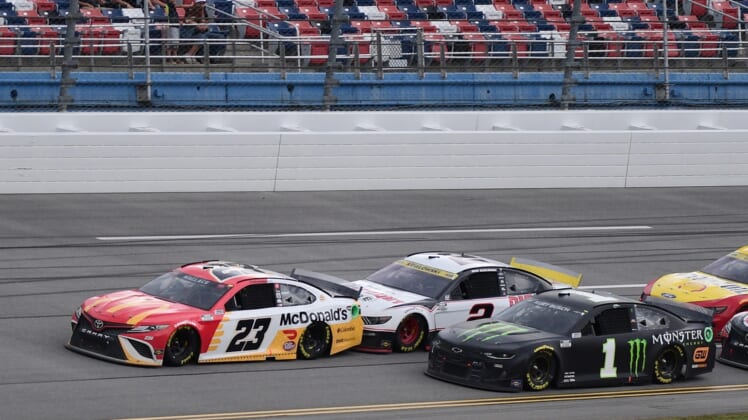 Bubba Wallace got his first-ever NASCAR Cup Series victory when he cashed in on a rainstorm that ended Monday’s YellaWood 500 at Talladega Superspeedway after 117 of a scheduled 188 laps.

Wallace took the lead on Lap 113. A crash brought out a caution three laps later. During the caution hard rain began to fall and the cars were brought to pit road as the red flag waved.

At about 3:30 p.m. CT, officials declared the race official because of the wet track and advancing darkness on a track without lights as Wallace became the first African American to win a race in NASCAR’s premier series since Wendell Scott did it in 1963.

Brad Keselowski was the top Playoffs driver as he finished second, .258 seconds behind Wallace.

His Team Penske teammate, Joey Logano who is also still in the Playoffs, was third.

Rounding out the top five was contender Christopher Bell of Joe Gibbs Racing.

Up next on the schedule is the Playoffs cutoff race on Sunday at the Charlotte Motor Speedway infield road course.

Several Playoffs drivers — Bowman, Martin Truex, Jr. and Kyle Busch — got caught up in a big wreck on Lap 98 of the 188-lapper. Bowman, who was spun from behind by Ricky Stenhouse, Jr. and who went nose-first into the wall, was knocked out of the race and will likely need to win next weekend to remain in the Playoffs. Busch and Truex needed repairs to their cars but were able to stay on the lead lap.

“I had a fast car, we were leading there,” Bowman said. “That’s just superspeedway racing.

“We’ll go on and try to win at the ROVAL (the Charlotte Motor Speedway’s infield oval, the final event in the Round of 12).”

Eighteen laps later, Bowman’s Hendrick Motorsports teammate, William Byron crashed out of the race when he was involved in another multi-car wreck. He, too, will likely need to win next week to advance to the Round of 8. 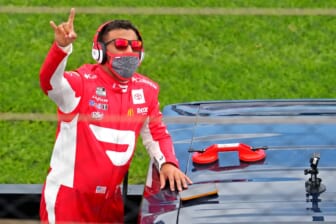 “We’ll go to the ROVAL and try to win that won and advance that way,” Byron said.

A third Hendrick driver, Kyle Larson, was comfortably cruising through the Playoffs but trouble struck Monday thanks to a slip-up by Byron. On Lap 56, Byron clipped and spun Justin Allgaier. Allgaier’s car then rammed Larson, causing major damage to the latter’s car.

Larson, who has won a series-best six races in 2021 and who was sitting atop the points standings, kept going but with a car knocked out of alignment. That problem caused more problems as he blew a tire after leaving the pits.

Larson finished 37th, four laps down. He heads to Charlotte 22 points above the cutline.

The race was originally scheduled to be run on Sunday afternoon. But intermittent showers plagued the track all morning. At about 2:45 p.m. CT, the cars took to the track for warmup laps. But with one warmup to go, heavy rain struck the front stretch.