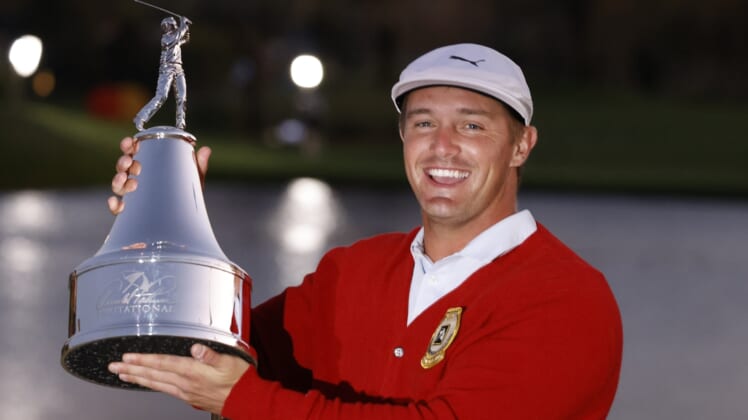 How does golf’s most unique competitor celebrate victories on the PGA Tour?

In the case of Bryson DeChambeau, the 27-year-old behemoth who won the Arnold Palmer Invitational last week, the toast called for the unique combination of chocolate milk, pinball and tea-and-lemonade flavored gummies. You know, the Arnold Palmer.

“That was kind of funny, it was kind of a tribute to him,” DeChambeau said Tuesday as he prepared for The Players Championship at TPC Sawgrass. “We had a little bit of champagne, as well, and popped a bottle. That was fun. …

“I’ll also say, when I went back, I was staying at a host family’s house, they’re great friends of mine and they were nice enough to host me all week in this beautiful home and I played some pinball, funnily enough. They had a pinball machine downstairs, so I was playing that for a little while.”

DeChambeau said he was able to bag the win last week without his “A game” and is excited to pull it all together in his third career start at TPC Sawgrass.

As is standard with DeChambeau, his approach will be anything but typical.

He kicked around the concept of hitting into the ninth fairway — this route requires clearing a significant water hazard tracing the designed fairway landing to the right — on No. 18, a reference to his 377-yard drive at Bay Hill last week.

“I’ll probably give it a try, but it’s most likely not going to happen,” DeChambeau said. “I haven’t seen it yet, but if there’s stands there there’s really no reason to go for it, when I could just drive it 100 yards from the green (on the 18th fairway) if I get a good wind normally. It’s not really that big of an advantage, but taking the water out of play and having an easier second shot, it may be easier, I don’t know.”

That line on the finishing hole would not be entirely novel. During the AJGA Junior Players Championship, Jeevan Sihota, a junior in high school from Victoria, British Columbia, played the ninth fairway to the 18th green in three consecutive rounds. The 18th played as a 462-yard par-4 during the AJGA event.

Entering the tournament, DeChambeau is the co-second favorite at +1500 along with Jon Rahm behind Dustin Johnson (+1200) at DraftKings. He opens Thursday in a group with Johnson and Collin Morikawa, which pairs golf’s three most recent major champions.

DeChambeau said he was back on the range early Monday after tucking himself in Sunday night as the only two-time winner on tour this season. Lights out is never after 11, he said.

“It’s been a quick turnaround,” DeChambeau said, adding he’s focusing on his need to continue strong iron play and putting to be in contention this week.

“I just can’t bomb it out there. You have to put the ball in play and there’s a few holes where you can take advantage, from a length perspective, but for the most part, the par 4s you’ve got to hit it in play and you’ve got to have great iron play this week. So that’s what I’m really focused on. If I can get my iron play down this week and my wedges down this week, I’ll have a great chance to win with my putting.”