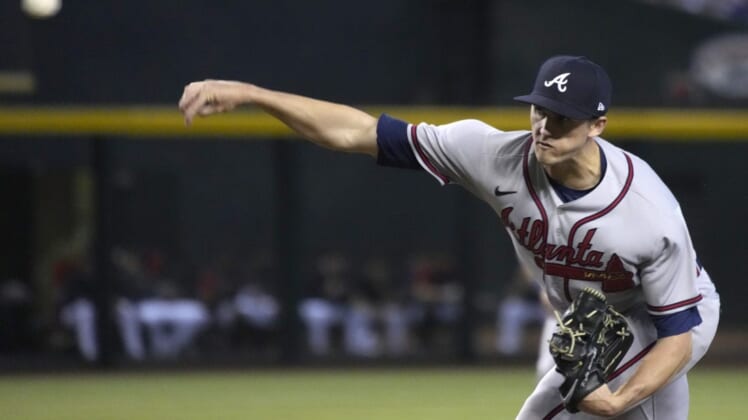 The Atlanta Braves will try to build on their newly found momentum when they host a two-game series against the struggling Oakland A’s on Tuesday.

The Braves have won five straight games, all since the start of the month, and are fresh from their first four-game sweep in Colorado. This success has Atlanta over .500 for the first time since April 9.

Oakland has lost six straight after being swept in a three-game home series by the Boston Red Sox. Their 1-9 homestand matched the second-worst in franchise history. The A’s are 16 games under .500 for the first time since Sept. 18, 2017.

Both teams were off on Monday. Atlanta had played 17 straight days.

“This homestand was a tough homestand,” Oakland manager Mark Kotsay said. “We’ll use (the off day) as a reset. A lot of guys in there are grinding. It’s definitely not for lack of effort. It’s almost as if they’re trying too hard right now.”

Oakland first baseman Seth Brown said, “Going on the road is probably going to be good for the boys a little bit. We’re getting real unlucky right now, I think all the way around. A chance to get on the road will be good.”

Wright, the team’s first-round draft pick in 2017, has enjoyed a breakout season. He is coming off a six-inning scoreless stint against the Philadelphia Phillies on June 1. Wright walked a season-high five batters in that game but continues to keep the ball in the park. He has given up only three homers in 10 starts this season.

Irvin has not allowed more than three runs since the season opener. In his last start against the Houston Astros on June 1, Irvin gave up one run in 5 2/3 innings. In three starts since returning from a stint on the injured list with shoulder tendinitis, Irvin has a 3.00 ERA.

Irvin has made five career relief appearances against Atlanta, all while he played for Philadelphia, and posted an 11.32 ERA in 10 1/3 innings.

Irvin will have to deal with an Atlanta offense that appears to be clicking.

Ronald Acuna Jr. hit .444 (8-for-18) in the Colorado series with his first home run since May 7. He matched his career-high with four hits in the finale. Acuna also showed his difference-making ability in right field by running down a fly ball in the gap to save an extra-base hit.

Manager Brian Snitker said, “He’s swinging the bat really well. I was just sitting there thinking it had been a while since he’d hit one, so that was good to see.”

The series will also mark the first time that first baseman Matt Olson has faced his former team since being traded by Oakland to Atlanta in the offseason. Olson is hitting .255 with a majors-high 23 doubles along with seven homers, including a 441-foot shot to center field on Sunday.