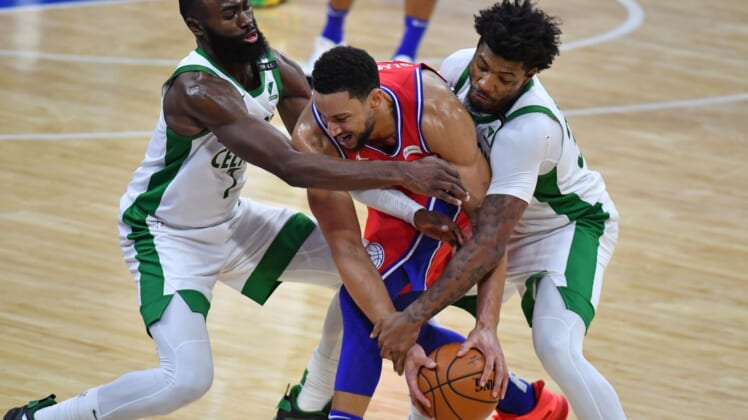 Boston Celtics coach Brad Stevens likes the balance and cohesiveness his healthier roster is playing with these days.

Led by Jayson Tatum’s 22 points and eight rebounds, the Celtics continued to play better on the defensive end on Sunday during their 116-86 win over the shorthanded Charlotte Hornets.

Boston has won back-to-back games, but the Celtics will face a much stiffer test Tuesday night when they host Joel Embiid and the Philadelphia 76ers.

“So the last two games, moving the ball has been good. I think what we’ve really been trying to emphasize — more cutting, more off-the-ball cuts, more movement in the last four weeks or so,” Stevens said. “We’ve had some growing pains along the way, but for the most part, it’s been pretty good offensively. So hopefully we can play defense like we did tonight more often.”

The Celtics made 21 of 54 attempts from 3-point range against the Hornets, who were without injured regulars LaMelo Ball, Gordon Hayward and Malik Monk.

Recently acquired Evan Fournier followed up his seven 3-pointers in a win Friday night against the Houston Rockets with four more versus Charlotte to finish with 17 points. Robert Williams continued to show his value inside and on the defensive end with 16 points and eight rebounds.

The Celtics had 29 assists and have recorded 64 of them over their past two games.

“I feel like this is a big win, obviously keeping the pace we’re on, keeping it rolling,” Williams said. “But we’ve got to have a lot more wins to get where we want to be.”

The Sixers swept back-to-back games against the Celtics in Philadelphia on Jan. 20 and 22.

Jalen Brown led all Celtics scorers in each game with 26 points in the first and 42 in the second.

But Embiid dominated both outings on both ends of the floor, finishing with 42 points and 10 rebounds in the first game and 38 points and 11 boards in the second.

Embiid returned from a 10-game absence due to a bone bruise in his left knee on Saturday during Philadelphia’s 122-113 victory over Minnesota, but sat out Sunday’s 116-100 loss to Memphis.

Embiid scored 24 points and grabbed eight rebounds against the Timberwolves, and he is averaging 29.8 points and 11.3 rebounds in 32 games this season.

“Any player who has been out three weeks and then plays in a game, you probably don’t play him in a (back-to-back), it’s just smart,” Sixers coach Doc Rivers said. “This one was pretty simple. This wasn’t a hard decision for any of us.”

Without Embiid, the Sixers couldn’t stop the Grizzlies from pulling away in the third quarter — a period they finished with a 26-point lead. Tobias Harris scored 21 to pace Philadelphia, which returned from a six-game, 12-day road trip on Friday.

“I told our guys this was going to be a tough one; you can just feel it in our walk-through this afternoon,” Rivers said. “You know they are tired.”

Rookie Tyrese Maxey (health and safety protocols) didn’t dress against Memphis after Rivers said he had an inconclusive COVID-19 test.

For Boston, Romeo Langford made his season debut following right wrist surgery and finished with three points, a rebound, a block and an assist in 12 minutes. Tristan Thompson (post-health and safety protocols reconditioning) and Semi Ojeleye (left side strain) were out.