Blue Jays to start season in Florida due to COVID restrictions 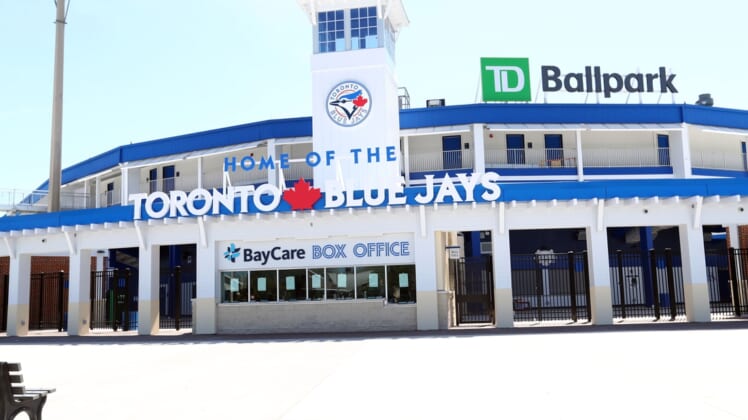 Mar 14, 2020; Dunedin, Florida, USA; A general view of TD Ballpark where the spring training game between the Tampa Bay Rays and Toronto Blue Jays has been canceled do to the COVID-19 virus. Mandatory Credit: Kim Klement-USA TODAY Sports

The Toronto Blue Jays will begin their regular season at their spring training facility in Dunedin, Fla., due to ongoing COVID-19 travel restrictions to Canada.

Blue Jays president Mark Shapiro told reporters Tuesday that the team will use a combination of Dunedin, Buffalo (home of the Triple A Bisons) and, hopefully, a return to Rogers Centre in Toronto.

At first, the Blue Jays will play their first two homestands (April 8-11 vs. the Los Angeles Angels, April 12-14 vs. New York Yankees) of the season in Dunedin, citing “the ongoing Canada-US border closure.”

“Next to the health and safety of our fans, players, and staff, the Blue Jays’ top priority is returning home to play on Canadian soil as soon as it is safe to do so,” the team said in a statement. “The club has been actively working through plans for what a safe return to Rogers Centre could look like, while also scenario planning alternatives. The Blue Jays will re-evaluate the situation and those circumstances will dictate next steps following the first two homestands.”

Fans will be limited to 15 percent capacity in Dunedin.

The Blue Jays played the shortened 2020 season in Buffalo, where they would likely move to in early June once the weather gets hotter in Florida.