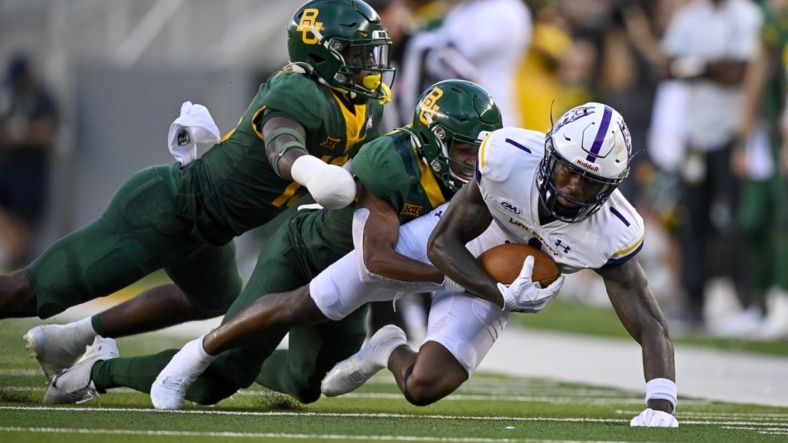 Blake Shapen passed for two touchdowns and ran for a third score and Gavin Holmes had a 72-yard punt return TD as No. 10 Baylor rolled to a 69-10 win over visiting Albany on Saturday in the season opener for both teams in Waco, Texas.

The Bears (1-0), the defending Big 12 Conference champions, had little problem with Albany, an FCS school that was picked to finish 12th in the 13-team Colonial Athletic Association after going 2-9 last year.

Reese Poffenbarger passed for 150 yards and a score and ran for a team-best 45 yards in three quarters of action for Albany (0-1).

Baylor scored on three of its first four possessions, with Shapen torching the Great Danes’ defense for touchdown passes of 47 and 38 yards to Monaray Baldwin and Hal Presley, respectively, and Craig Williams ramming home a 4-yard TD run.

Holmes’ punt return in the first quarter followed Williams’ scoring run and preceded a 17-yard touchdown pass from Poffenbarger to Julian Hicks that was Albany’s only true highlight of the first quarter.

Shapen added a 1-yard touchdown run on an all-or-nothing final play of the half to push Baylor’s lead to 35-7 at the break. The Bears outgained Albany 257-139 in the first half, with a 214-87 edge through the air.

Baldwin ripped off a 50-yard run around left end on Baylor’s first drive of the third quarter to increase the Bears’ advantage.

Kyron Drones, who relieved Shapen at the 6:19 mark of the third quarter, engineered a scoring drive in his first series, eventually scoring on a 9-yard jaunt late in the quarter. Richard Resse added TD runs of 1 and 7 yards in the fourth quarter before Qualan Jones capped the scoring with a 27-yard TD run as the Bears poured it on late.