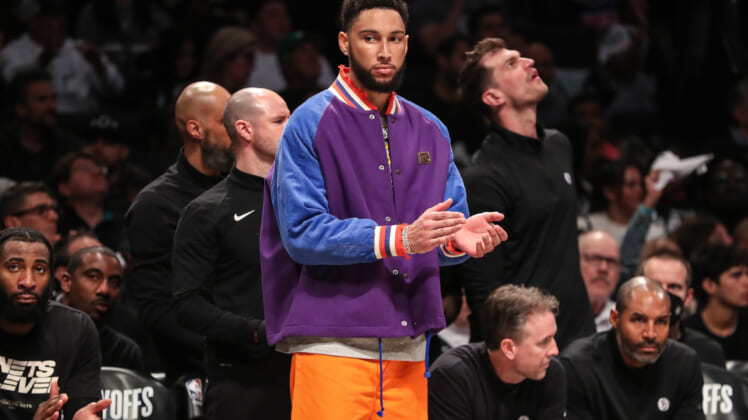 We finally have a Ben Simmons injury update now that his season is officially over with the Brooklyn Nets being eliminated in their first-round playoff series, getting swept by the Boston Celtics.

Not that it ever got started in the first place, but hope remained all year that Simmons would return to the court, first with the Philadelphia 76ers, then with the Nets once a deal was completed at the trade deadline.

Instead, Simmons ended up missing all 82 regular-season games and even with the extra time available from his team making the playoffs without him, Simmons still couldn’t suit up. But we knew all that already.

The new information today comes via the Nets themselves, who announced Simmons will undergo surgery for the herniated disc in his back. It is expected to keep him away from basketball activities for at least the next three-to-four months.

Their media release also notes that Simmons has received multiple consultations from several different back specialists and they have determined surgery is the next best course of action for his health in the long run. The official operation name is called a microdiscectomy and Simmons is set to go under the knife on Thursday, May 5.

Getting this surgery now should allow Simmons to be 100% by the start of the 2022-23 NBA season, which was the expectation going into the 2021-22 year, but evidently, we were all wrong.

Ben Simmons back to 100% could be what the Nets need

At the same time, if the Nets can add Simmons to their current core highlighted by Kevin Durant and Kyrie Irving, they could have a truly special Big 3 that few can match, which will certainly place them among the teams with the best NBA Finals odds. Yet, without being able to see how they all mesh together, the actual version may differ from what it looks like on paper.

At his peak, Simmons is one of the best defenders in the NBA, being able to guard multiple positions while committing basketball robbery, having led the league in steals per game in 2019-20. A three-time NBA All-Star and two-time member of the All-Defensive team, there’s a reason why the Nets and several others were constantly rumored to have interest in the superstar point-forward.

Hopefully his latest operation can help Simmons return to the court, where, when healthy, he is one of the best young players in basketball.