Bears news: The decision that will end the Matt Nagy, Ryan Pace era in Chicago 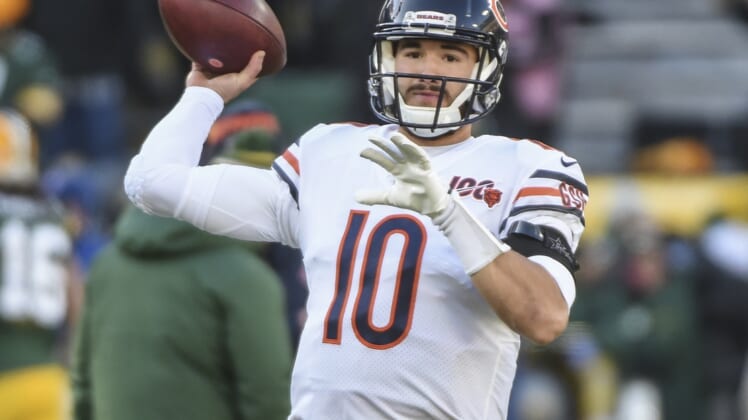 Back in the spring of 2017, Matt Nagy was an ascending offensive coordinator for the Kansas City Chiefs. Bears news included then-coach John Fox being on the hot seat.

More than three years later, and the 2017 NFL Draft has proven to be among the biggest failures in recent Bears franchise history. By now, the story is well known.

Bears news: The decision that will end the Matt Nagy, Ryan Pace era

“It seems clear in retrospect that, six weeks ahead of the NFL draft, Pace had made up his mind on whom he would select with the Bears’ top pick, even if he wasn’t sharing that secret beyond a tight inner circle,” Dan Wiederer of the Chicago Tribune noted. “Pace had become enamored with (Mitch) Trubisky the previous fall, drawn to his accuracy and pocket presence, his resilience and drive.”

This is the one decision that will ultimately end Matt Nagy’s tenure as the Bears’ head coach following the 2020 NFL season or before it even ends. A decision that was made before Nagy was even a member of the organization.

Of course, we’re talking about Chicago’s decision to trade up from the third selection to No. 2 overall with the San Francisco 49ers for Mitchell Trubisky. The team did so with both Deshaun Watson and reigning Super Bowl MVP Patrick Mahomes on the board. It’s been talked about ad nauseam. Sure, very few people could have foreseen Mahomes turning into a generational talent after existing in a college-style offense at Texas Tech. Heck, Watson was not seen as a can’t-miss prospect.

Even then, these Bears opted to go with a quarterback in Trubisky who had one year of college starting experience at North Carolina and entered the NFL with 572 career pass attempts in the amateur ranks. Heck, Trubisky was beat out for the Tar Heels’ starting quarterback job by Marquise Williams (who?) as a sophomore. Fast forward less than four years, and the differences between Trubisky and his 2017 classmates could not be any more stark.

Keep in mind that Trubisky had a head start over Mahomes in that he started 12 games as a rookie compared to one for his counterpart. That can’t be lost in this. It’s also important to note that Chicago’s decision to start Trubisky as a rookie might have set back his progress.

The team did not have enough talent on offense for him to succeed. It was working under a defensive-minded head coach in John Fox who would ultimately be fired after the quarterback’s rookie season.

Bears news: Trading up for Mitchell Trubisky in the 2017 NFL Draft

Not only did Chicago reach for a quarterback many perceived to be a project. It traded multiple picks to the San Francisco 49ers to move up one spot in the draft. That’s not the type of Bears news their fans want to hear.

A team that was coming off a 3-13 record, the Bears needed as many draft picks as they could get their hands on. Instead, they forfeited the ability to land potential starters later in the draft.

San Francisco ultimately selected star linebacker Fred Warner with the third-round pick it acquired from Chicago the following year. And as an example of this trade blowing up the Bears’ face, these 49ers then moved the other mid-rounder they acquired in the trade to the Saints, who selected ultimate NFL Offensive Rookie of the Year Alvin Kamara in the 2017 NFL Draft.

Chicago went from being able to potentially land Mahomes, Warner and Kamara to selecting Trubisky. Talk about one of the biggest fails in modern NFL history. Kamara is one of the top all-purpose backs in the NFL while Warner could very well be the league’s best inside linebacker right now. Let that sink in for a second.

It’s certainly an interesting thing to look at with Chicago set to take on Watson and the Texans in Week 14. The team has lost six consecutive since a 5-1 start to the season. It ranks 28th in the NFL in scoring, 30th in total offense and 23rd in passing offense. Heck, Chicago boasts the second-worst rushing attack in the NFL. Kamara might have been able to help there.

Both Nagy and Pace will soon be gone from the Windy City. And while the Bears’ head coach has been in the news more recently, it’s the general manager who doomed his tenure nine months before Nagy joined the organization.