Unseeded Barbora Krejcikova of the Czech Republic spoiled a potential storybook ending for Anastasia Pavlyuchenkova, beating the Russian 6-1, 2-6, 6-4 in Saturday’s final in Paris.

Krejcikova dominated the opening set, but struggled in the second. The third set stayed close until Krejcikova broke it open at 3-3.

She converted six of 14 break opportunities and was broken five times in 12 chances.

While it was the first Grand Slam singles final for both players, it came in Pavlyuchenkova’s 52nd Grand Slam appearance, a record.

Pavlyuchenkova, 29, played in her first Grand Slam event at age 15 when she made the Wimbledon field as a wildcard in 2007.

Krejcikova, 25, was playing in just her fifth main draw at a major and overcame five double faults to become the first Czech Republic woman to win the French Open since Hana Mandlikova in 1981. Only Monica Seles and Bianca Andreescu have won a singles title in fewer Grand Slam appearances (four).

Krejcikova is now in position to become the first woman to sweep the French Open singles and doubles titles since American Mary Pierce pulled off the feat in 2000. 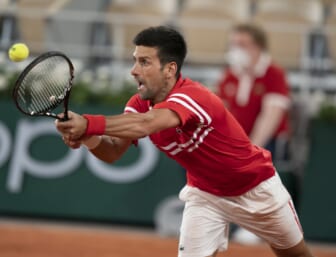 She and countrymate Katerina Siniakova reached the doubles final with Friday’s 6-1, 6-2 victory over Poland’s Magda Linette and American Bernarda Pera.

The pair will face American Bethanie Mattek-Sands and Poland’s Iga Swiatek in Sunday’s final after that duo recorded a 6-3, 6-4 win over Romania’s Irina-Camelia Begu and Argentina’s Nadia Podoroska.

Krejcikova and Siniakova won the 2018 doubles title at Roland Garros. The duo also won the Wimbledon crown that year.