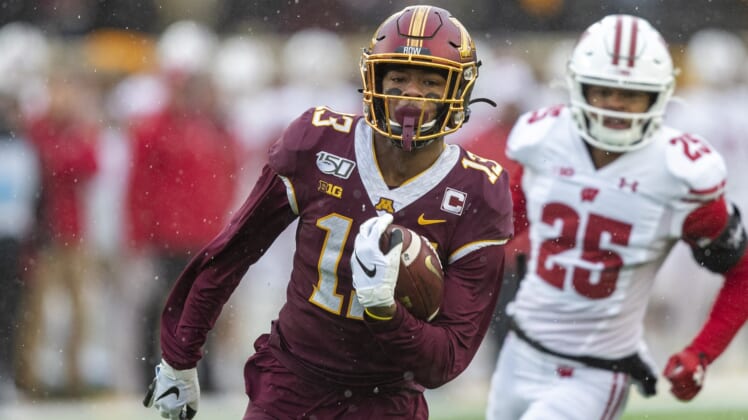 The Baltimore Ravens made two picks in the first round of the 2021 NFL Draft after acquiring another selection in the Orlando Brown Jr. trade.

With needs at wide receiver and out of the edge, Baltimore found both value and need at each position. With its own first-round selection (27th overall), the team nabbed former Minnesota star receiver Rashod Bateman.

The Baltimore Ravens then picked up a stud pass rusher in Jayson Oweh from Penn State in the selection they acquired from Kansas City (31st overall).

We already know that the Ravens have been in need of a wide receiver for Lamar Jackson. Marquise Brown has not picked up his game after excelling as a rookie back in 2019. Second-leading receiver Willie Snead also signed with the Las Vegas Raiders during NFL free agency.

Bateman (6-foot-2) was among the most-underrated players in the entire draft. He recorded 60 receptions for 1,219 yards for the Golden Gophers in 2019 before a COVID-shortened 2020 campaign.

As for Oweh, he’s a natural fit in the Ravens’ 3-4 defensive scheme. It’s also a major need after Baltimore lost Pro Bowlers Matt Judon and Yannick Ngakoue in free agency.

“Prototypical NFL build and some of the most exciting traits and explosiveness of any edge defender in this draft,” NFL Media’s Lance Zierlein noted in his scouting report of the Penn State product. “Those features can’t be taught but they can be coached up, so any concerns about his lack of polish at this stage should be tempered.”