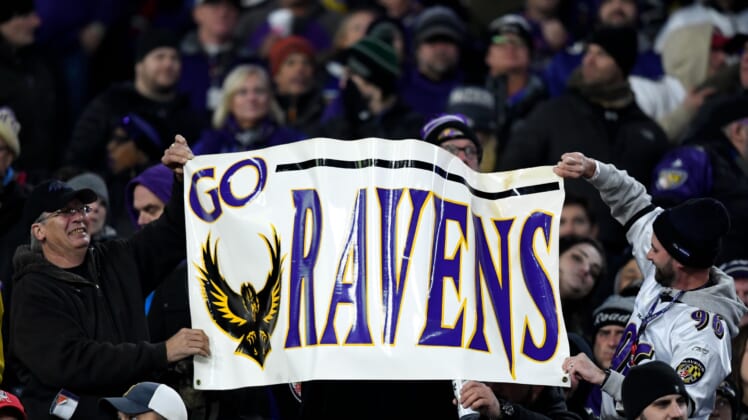 Nov 3, 2019; Baltimore, MD, USA; General view of Baltimore Ravens fans holding a sign in the stands during the fourth quarter of the game between the Baltimore Ravens and the New England Patriots at M&T Bank Stadium. Mandatory Credit: Douglas DeFelice-USA TODAY Sports

Amid growing fears for the 2020 NFL season due to the COVID-19 pandemic, the Baltimore Ravens announced Wednesday they will dramatically reduce their stadium capacity this year at M&T Bank Stadium.

The Baltimore Ravens announced major changes that will dramatically impact fans for the upcoming NFL season. Most notably, the team will reduce its seating capacity at M&T Bank Stadium to fewer than 14,000, if attendance is even allowed this year.

Furthermore, the team also revealed all season tickets for the 2020 season will be deferred until 2021. Season-ticket holders will be able to keep their same seats next year and can receive credit for funds already paid this year. The club is also suspending single-game ticket sales.

M&T Bank Stadium typically boasts a seating capacity of 71,000 for games. The Ravens averaged over 70,000 fans at their homes games in 2019, per ESPN, routinely selling out.

The announcement comes amid growing concern from NFL clubs for the 2020 season. The Green Bay Packers recently announced changes to stadium capacity at Lambeau Field and will be reducing ticket sales.

While the NFL makes a majority of its revenue from television deals, the league will lose billions of dollars if attendance is greatly reduced or wiped out this season.

If the 2020 NFL season is played without fans, the league is projected to lose approximately $5 billion this year. It would be particularly costly for teams like the Dallas Cowboys, New England Patriots, New York Giants and New York Jets.

Stadium revenue is generated from ticket sales, parking and consumer spending at each NFL stadium. While some of the money could be made up for through unique in-stadium advertising, the league still faces a sizable hit.

As a result, the NFL and NFLPA have been negotiating how to share the financial burden. But those discussions could get ugly following the league’s recent proposal, which the players’ union strongly rejected.

While a flat cap in 2021 could be a solution, which we explain here, the NFL will face even bigger problems if an agreement isn’t reached. If things get as ugly as they did in MLB, there’s a risk of the NFL season not happening.