Backed by homers, Trevor Williams leads the Chicago Cubs over the Milwaukee Brewers 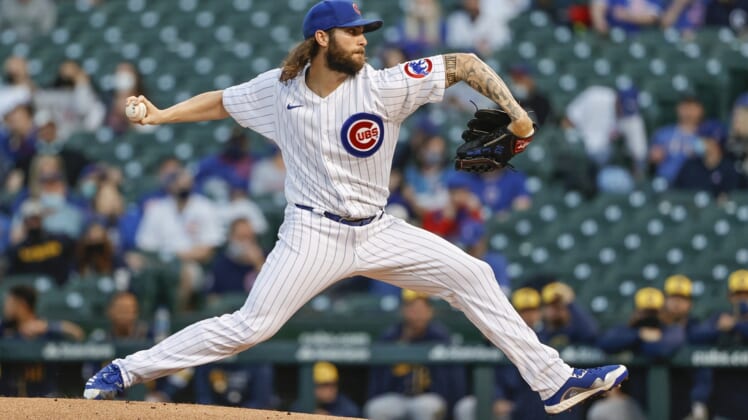 Right-hander Trevor Williams debuted for his new team with five perfect innings before giving up two runs in the seventh, and Willson Contreras, Javier Baez and David Bote all homered in a four-run fourth, lifting the Chicago Cubs past the visiting Milwaukee Brewers 5-3 on Monday night.

The Cubs won their third straight. The won the final two of their opening series against the Pirates after losing the first game.

The Brewers, who beat Minnesota on Opening Day, have lost three straight since then.

Signed by the Cubs as a free agent shortly before spring training, Williams (1-0) blanked the Brewers on one hit over the first six innings before getting lifted two batters into the seventh.

He retired the first 15 batters he faced before Omar Narvaez led off the sixth with an infield single.

Leading 4-0, Williams escaped a bases-loaded, one-out jam in the sixth, but was pulled in the seventh after walking Christian Yelich and allowing a single to Avisail Garcia.

Jason Adam came on to retire the first two batters he faced, but then served up a three-run homer to Narvaez that trimmed the Chicago lead to one.

Eric Sogard’s RBI triple in the bottom of the seventh gave the Cubs some breathing room at 5-3, and Chicago relievers Andrew Chafin and Alec Mills slammed the door by retiring all six men they faced over the final 2 1/3 innings.

Mills was credited with his first save. Williams was charged with two runs on two hits in six-plus innings. He walked two and struck out six.

Left-hander Brett Anderson (0-1) took the loss for the Brewers. He allowed four runs on four hits over five innings, with one walk and four strikeouts.

All four runs off Anderson crossed the plate in the fourth, when Contreras followed a walk to Ian Happ with his first homer of the season.

After Anderson retired the next two batters, Baez and Bote went back-to-back to make it 4-0. Each homer was his first of the season.

With his infield single and homer, Narvaez was the only player with multiple hits. The teams had nine hits between them.