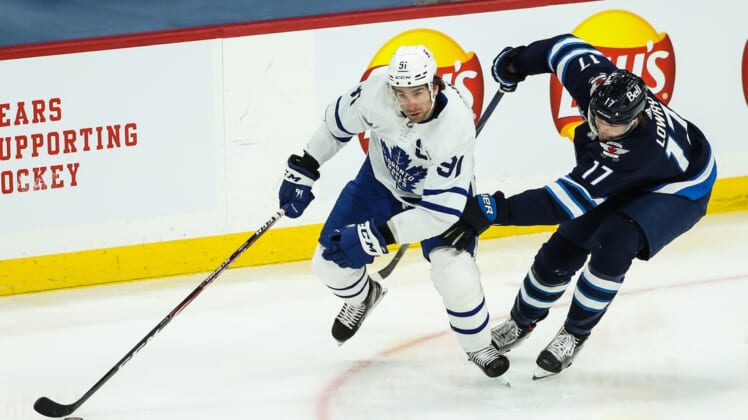 Auston Matthews scored a goal in his third consecutive game and Jack Campbell made 26 saves to fuel the visiting Toronto Maple Leafs to a 3-1 victory over the Winnipeg Jets on Wednesday.

Zach Hyman matched Matthews by collecting a goal and an assist and Alexander Kerfoot added a short-handed tally for the Maple Leafs, who improved to 4-0-1 in their past five games.

Toronto’s Mitchell Marner set up two goals to boost his team-leading totals in assists (33) and points (46). He has three goals and five assists in five games against Winnipeg this season.

Defenseman Josh Morrissey scored a power-play goal for the Jets, who saw captain Blake Wheeler sustain an undisclosed injury late in the first period. Wheeler did not return for the start of the second period and was ruled out for the game.

Toronto opened the scoring at 4:40 of the first period. Hyman skated in and saw his backhand shot from in front denied by Connor Hellebuyck (23 saves), but Matthews buried the rebound for his NHL-best 24th goal of the season.

Matthews is no stranger to scoring the game’s opening goal. He has done so six times this season, tying him with Boston’s David Pastrnak and Tampa Bay’s Ondrej Palat for the most in the NHL.

Marner set up the Maple Leafs’ second goal after weaving his way into the slot before finding Matthews at the doorstep. Matthews’ shot hit the post, and Hyman alertly deposited the loose puck into the net for his 12th goal of the season and eighth in his past 15 games.

Winnipeg received a four-minute power play late in the second period after Toronto defenseman TJ Brodie was given a double minor for high-sticking, However, Kerfoot scored on a breakaway to give the Maple Leafs a 3-0 lead. The goal with 3:20 remaining in the period was Toronto’s first short-handed tally since defenseman Jake Muzzin converted against the Jets on March 13.

Winnipeg rebounded 35 seconds later, with Morrissey’s blast from the point beating Campbell for his second goal of the season.

Campbell held the fort from there to improve to 7-0-0 on the season.