Tommy Paul of the United States serves to Cameron Norrie of Great Britain during their round four match of the BNP Paribas Open, Wednesday, Oct. 13, 2021, in Indian Wells, Calif.

Tommy Paul is through to his first career ATP Tour final.

Tiafoe served for the match at 6-5 in the second set, but Paul pulled even, then won the tiebreaker.

Paul’s final-round opponent will be third-seeded Denis Shapovalov, who won an all-Canadian semifinal against second-seeded Felix Auger-Aliassime 6-4, 7-5. Shapovalov is looking for the second title of his career — in the same tournament where he won his first championship in 2019. 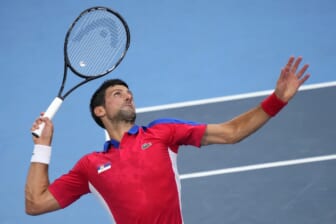 Korda finished with a 10-5 edge in aces, though his 30-19 advantage in winners was offset by committing far more errors than Nakashima, 34-12.

Korda, 21, will oppose top-seeded Carlos Alcaraz of Spain, 18, for the championship. Alcaraz routed sixth-seeded Sebastian Baez of Argentina 4-2, 4-1, 4-2 in the other semifinal match.

The winner between Korda and Alcaraz will capture the second ATP title of his career.