World No. 1 Novak Djokovic topped No. 2 Daniil Medvedev in the final of the Rolex Paris Masters on Sunday, winning a record 37th ATP Masters 1000 title.

Djokovic rallied from a set down to defeat Medvedev 4-6, 6-3, 6-3 and avenge his loss in the U.S. Open in September. He also broke his tie with Rafael Nadal for most Masters 1000 titles.

It was the first Paris finals meeting between the two top players in the FedEx ATP Rankings since Stefan Edberg and Boris Becker clashed in 1990.

“I went back and reviewed the final of the U.S. Open to see what I did wrong and what I did right,” Djokovic, of Serbia, told the Tennis Channel after the match. “I tried to read the patterns of his serve and the ball toss, maybe. I tried to look for the small details, because it was a match of small margins. He started better, broke my serve in the first game and I came back. He served the first set out pretty comfortably, but I felt as if I was there.” 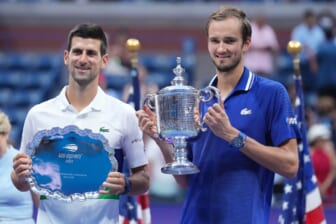 “I thought it was only a matter of time when I was going to read his serve better and start to make some plays,” Djokovic said.

The Russian had his opportunities, namely 10 break chances against Djokovic’s serve, but he could convert only three of them — two of them in the first set. At the same time, Djokovic capitalized on five of his six chances.

Djokovic and Medvedev both are set to play in the Nitto ATP Finals, which begin next Sunday in Turin, Italy.

Seventh-seeded Marton Fucsovics of Hungary cruised to a 6-4, 6-0 opening-round victory over Adrian Mannarino of France.

Fucsovics won 87 percent of the points on his first serve and fired six aces in the 73-minute victory.