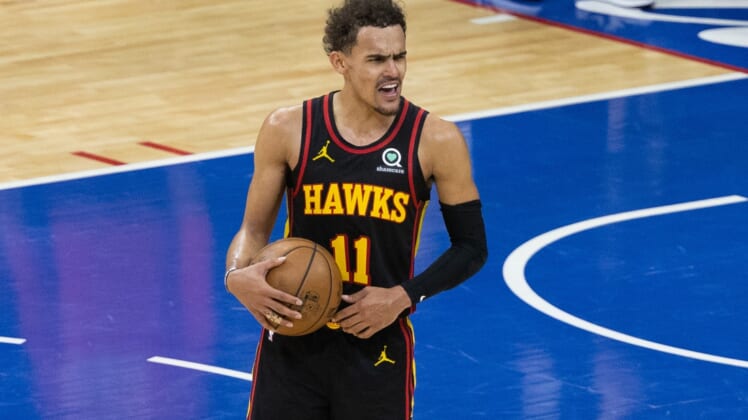 Jun 20, 2021; Philadelphia, Pennsylvania, USA; Atlanta Hawks guard Trae Young (11) reacts with fans in the closing seconds of a victory against the Philadelphia 76ers in game seven of the second round of the 2021 NBA Playoffs at Wells Fargo Center. Mandatory Credit: Bill Streicher-USA TODAY Sports

Calling Trae Young a cornerstone for the franchise, the Atlanta Hawks on Friday announced the five-year maximum contract extension for their All-Star guard.

The new deal, which extends Young’s rookie contract, is reportedly worth a minimum of $172 million but would increase to $207 million should Young make one of the three All-NBA teams.

Young averaged 28.8 points, 9.5 assists, 2.8 rebounds and 1.3 steals per game during the Hawks’ 2021 playoff run. Atlanta knocked out the New York Knicks and the Philadelphia 76ers before falling in six games to the eventual NBA champion Milwaukee Bucks.

“This is a great day for the Hawks franchise and the city of Atlanta,” Hawks president of basketball operations/general manager Travis Schlenk said in a release. “Trae is a special player and person who from Day One, embraced being a leader on the court and in our community. We are excited to have him as the cornerstone of our program long-term as we work toward our goal of bringing a championship to Atlanta.”

In the first game of the Eastern Conference finals, Young put up 48 points, 11 assists and seven rebounds as Atlanta won 116-113. However, the Hawks dropped four of the next five games, including two that Young sat out due to a foot/ankle injury. 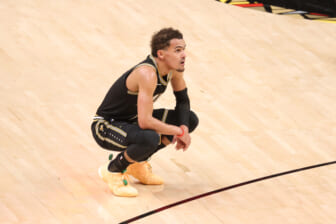 He was selected fifth overall out of Oklahoma in the 2018 draft by the Dallas Mavericks but was immediately dealt to Atlanta along with a 2019 first-round pick in exchange for Luka Doncic.

“I’m grateful to the Hawks, the Ressler family, my teammates and the entire Atlanta community for embracing me from the very beginning,” Young said in a release, noting Hawks majority owner Tony Ressler. “I’m honored and excited to keep building with this great organization.”